For those of us who find excitement, wonder, and education in exploring the bluegrass music of previous times, Rebel Records' recent digital campaign has been a blessing. 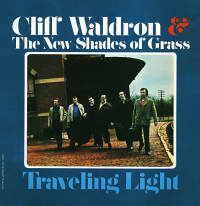 Those who come to the bluegrass fold late- in my case, I was well into my twenties before I had a true appreciation of the music- have spent years catching up on the sounds we've missed. The early days of the music has been pretty easy to experience through both budget (thanks to generous EU copyright laws) and expansive (Bear Family) reissues of classic sounds.

What has been less accessible has been the music of the late 60s to early 80s. Having not made the jump to compact disc from vinyl and cassette, much of the music has been out of print for decades with only sselect tracks appearing on occasional compilations.

Rebel first dipped their toes in the digital-exclusive arena about four years ago. At that time, the label was attempting to reissue a pair of albums every couple months, and included albums including Ralph Stanley's "Down Where the River Bends and "Old Home Place" albums as well as albums from Del McCoury and a County album from Norman Blake and Red Rector. The program ran out of gas after that release schedule proved overly ambitious. Since last fall, things are running on all cylinders with a minimum of two digital-only reissues appearing monthly.

Over the past several months, Rebel has digitally issued more than a dozen albums for the first time. With sales increasing monthly, and overall digital sales up 25 to 30% since last year, Mark Freeman of Rebel and County Records states that he has been pleased with the reception these digital reissues have received.

While the label doesn't release sales figures, in an exchange of e-mails with Mark Freeman he told me that things have gone well. "Sales have been better that we expected, and we are very pleased with the results of the campaign up to this point. I say 'in general' because there has been a pretty wide variation in sales of different artists," Freeman shared.

Depending on the perspective held, some readers may be surprised that the digital releases that have garnered the strongest sales have come from artists that may be less well-known than Ralph Stanley and Del McCoury. Roy McMillan's "High Country" album and Benny and Vallie Cain's 1968 debut album sales have been among the strongest in the digital collection.

Freeman confirms that Rebel has received positive feedback for their digital-only releases, but admits that there continue to be those customers looking for CDs. People are happy this material is available for download, but Freeman continues to be asked, "When will they be able to buy it on CD?"

Even through the sterile medium of e-mail, Freeman enthusiasm for Rebel's current endeavour is apparent. "Reaction from buyers has been very positive," Freeman writes, adding that he and the label have received "quite a few requests for specific artists and inquiries about what the future releases will be."

Anticipating that it would be a challenge deciding which albums to reissue in digital format, I ask Freeman about the labels' future intentions. "In selecting what to add next, we have tried to put out as wide a variety of different artists as possible, rather than do all the most popular artists first, even though that would probably be more profitable."

"When we can compare various albums to learn what is most popular, we will most likely put out a combination of requested items plus those deemed most commercially viable.

Within the digital reissue campaign continuing, two more albums from County records are on the way. "Clifton and Company" was the 1977 release from Bill Clifton & the Dixie Mountain Boys and includes backing from the likes of Mike Auldridge, Tom Gray, Bill Keith, and Red Rector.

For those who are looking for something less familiar, "Bluegrass in the Carolina Mountains" is also on its way. Recorded by the obscure (Freeman's word choice) Galax, VA-area band The Foot Hill Boys, this 1972 release features Cullen Galyean on banjo. Noted for his hard-driving style of play, Galyean passed away last summer and I personally can't wait to hear this one!

Freeman concludes our conversation: "I'm looking forward to all of our albums eventually coming out in digital format but, if I had to choose some specific ones, I'd probably go with albums by some of my personal favourite artists like Ralph Stanley, Larry Sparks, and Dave Evans. I'd also love to have all four of our Marshall Family records see the light of day atsome point!"

Without hard numbers, it's hard to independently gauge the reaction this Rebel/County digital campaign has generated. Anecdotally, I know I've been approached about these albums from folks looking for recommendations. It would be hard to make a poor selection.

Several Ralph Stanley titles have been released. Perhaps my favourite reissued so far has been "Lonesome and Blue," one of the more recent albums hailing as it does from 1986. This album featured one of the finest bluegrass singers to share a stage with Ralph as a member of his Clinch Mountain Boys, Charlie Sizemore. As it turned out, after a decade with the band, this was the final album Sizemore recorded with Stanley; he sure chose to go out on a high.

From the first notes of Mountain Rosa Lee, Sizemore demonstrates that there are few bluegrass singers better suited to Stanley's mountain music. The title track features Sizemore on the lead with Stanley harmonizing, and the sound is haunting. Amongst the dozen outstanding tracks included on "Lonesome and Blue" are Wicked Wine, So Blue, and an expressive (and quick) two-minute take of Blue Moon of Kentucky, all sung by Stanley.

Full of energy and with such precision apparent, what is perhaps most remarkable about the album is that it was captured live in a single studio session on April 2, 1986. "Lonesome and Blue" is one of those albums that you just fall into and when you get up again, the music has become an engrained part of your soul.

For those looking for classic Stanley gospel, "Old Country Church" (1972) and "I'll Wear a White Robe" (1980) should more than satisfy. The former features Keith Whitley, Ricky Skaggs, along with Roy Lee Centers, Jack Cooke, and Curly Ray Cline. The same line-up is featured on the impressive "Something Old, Something New" (1972), while "I'll Wear A White Robe" again features the Sizemore fronted group with Junior Blankenship, Cline, and Cooke.

Some fairly progressive sounds that now seem a mite less so are featured on the latest album to appear digitally. The Virginia Squires' 1984 Rebel offering "Mountains & Memories" is a terrific sample of mid-80s bluegrass. The line-up of Mark Newton, Sammy Shelor, Ronnie Simpkins, and Rickie Simpkins would go a long way over the next twenty-plus years to define the modern bluegrass sound. This album may be of interest if the approach of The Gibson Brothers appeals.

Another recent offering from Rebel comes from one of my favourite bluegrass vocalists, Cliff Waldron. Waldron, who released several albums on his own and with Bill Emerson more than forty years ago, has a voice for the ages- not high, lonesome, and sharp but cool and mellow. Ideally suited to his material, Waldron was pretty adventurous covering country hits from Merle Haggard (Silver Wings) and Sammi Smith (Help Me Make it Though the Night) as well as fairly recent folk gems (You Ain't Going Nowhere) and early bluegrass standards including Bill Cheetham and Nobody's Love is Like Mine. Thirty minutes of pure, bluegrass bliss.

I've not explored the Bill Harrell catalogue to the depth I need to, having been limited to a couple Reno/Smiley discs that have come my way. Bill Harrell and the Virginian's "I Can Hear Virginia Calling Me" was his first Rebel release, recorded in 1979. Featuring both Mike Auldridge and Larry Stephenson, the album lopes calmly along with songs like Green Rolling Hills and I Want to Go Back to the Mountains setting the pace. He definitely felt an affinity for Virginia! Not innovative perhaps, but well worth purchasing as the singing and playing is exactly what I hear in my head when I'm thinking of bluegrass.

I'd never knowingly heard Al Wood and the Smokey Ridge Boys prior to listening to the download of "Sing Me a Bluegrass Song," but I've sure felt fortunate to have heard them since. Similar to the Bill Harrell album, this one just screams, "BLUEGRASS!" When someone asks, "What is bluegrass, anyway?" a more clear answer isn't likely to be available; play them "Sing Me a Bluegrass Song" in its entirety.

Several other releases have come out within this campaign, including Del McCoury's 1975 self-titled release, fiddle albums from Kenny Baker ("High Country") and Curly Ray Cline ("Chicken Reel"), a collection of early 1960s Country Gentlemen songs ("The Best of the Early Years"), and a stellar Dave Evans set ("Bluegrass Memories"). My review of some of those releases are posted here.

Of all the albums to come our way from Rebel and County in these past months, the one that made my heart pitter-patter the quickest was "Rollin" from Bill Grant and Delia Bell. With their music being spotted for sale only slightly more often than pigs in flight, this 1981 album is a true treasure.

Bell's voice is, as always, the centerpiece of the album; like the late Hazel Dickens, Bell has a voice that is as natural as it is beautiful:you can hear the working girl blues in every syllable of "No One Else." Bill Grant's voice blends wonderfully with Bell's and his lead work is top notch. When he sings, "When I hear that trumpet blow, someone will call my name" in Goin' to See My Jesus or "It's you and only you" in Only You, one would be hard pressed to identify that he's from the mid-western plains rather than the hills of Kentucky.

Don't get me started on their renditions of The Girl at the Crossroads Bar and Stone Walls and Steel Bars. Wonderful.

While listening to "Rollin" while driving the other day, an extended fiddle break caught my ear; I thought to myself- "That sounds like Benny Martin." It doesn't happen with me very often, but when it does one feels like they may actually know something- turns out, it was the Big Tiger fiddling on this Josh Graves-produced album.

I believe we turn to bluegrass for self-affirmation, an assurance that our lives are tolerable partly in recognition that others are experiencing challenges similar to our own. If true, such evidence is present in almost all of this album's music. Recorded a few years before Bell's Emmylou Harris-produced Warner Brothers album, "Rollin" is crucial listening for those who like to hear more than a little Oklahoma country in the mix.

Whether you're relatively new to the bluegrass world, or have been listening since its earliest days, you're sure to find something of value and interest within the recent digital issues from Rebel Records. All the Rebel and County digital reissues are available at various retailers.

Next up for the label are three compilation releases coming June 7, each of which will be available both on CD and digitally. John Duffey, The McPeak Brothers, and Larry Sparks will be anthologized, with the Sparks set being a collection of gospel recordings stretching as far back as 1974.