Alison Krauss & Union Station featuring Jerry Douglas performed in Edmonton for the first time in four years earlier this week (July 5), and (outside a nearly sold-out theatre with air circulation challenges) it would be hard to imagine anyone leaving the Jubilee Auditorium unsatisfied. 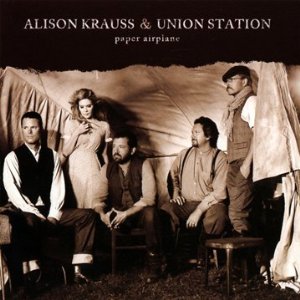 I have seen AKUS live on a handful of occasions at festivals and at IBMA, but this was the first time catching a theatre show and it is an experience that I highly recommend. The performance delivered is focused and well-coordinated, but contains the personal and humorous spontaneity one expects from Krauss and her cohorts: I'm not sure I'll again be able to listen to The Boy Who Wouldn't Hoe Corn with a straight face. No one could argue that they didn't get their money's worth as the concert stretched to about two hours and fifteen minutes.

Some of the guitar breaks Ron Block took were absolutely amazing, and while I wasn't taking notes during the show I came away with an even greater appreciation for Alberta's favourite bluegrass son-in-law. One of the few disappointments was that Block was given only one lead vocal spot.

Dan Tyminski was given the opportunity to sing several songs including Pastures of Plenty, Rain, Please Go Away, The Boy Who Wouldn't Hoe Corn, Dust Bowl Children, Bonita and Bill Butler, Man of Constant Sorrow, and (I think) Wild Bill Jones. Note to Alison- the George Clooney "butt double" routine can be retired any time now.

For Dobro players- and aren't the only people who really appreciate the Dobro are other Dobro players?- Jerry Douglas performed solo the Douglas Concert Suite (A Tribute to Peador O'Donnell, Monkey Let the Hogs Out, and a couple other interludes) so the others could take a well-deserved break, while the band ripped through a fiery rendition of Who's Your Uncle? , early in the set.

AKUS, despite not having toured in a number of years, was spot-on and fresh, as expected. My show companions, not as familiar with "Paper Airplane" to the degree that some were but still significant fans, were very impressed and responded positively to the new material. An emotional performance of Dimming of the Day, brought tears to several eyes and my wife admitted to getting goose bumps during a pair of songs.

Krauss was in terrific voice and among the songs performed- in no particular order and not without omission- were: Paper Airplane, Sawing on the Strings, Restless, Let Me Touch You For Awhile, Daylight, Baby, Now That I've Found You, Everytime You Say Goodbye, O Atlanta, Lay My Burden Down (an especially beautiful performance), and Miles to Go. Ghost in this House, a song I am not particularly enamored with, was raised several notches in my estimation as a result of Krauss's superior rendering, made all the more impressive by her admission that she needed to belch during the song's entirety!

A handful of extremely pleasant song surprises were also in store: I never expected them to perform either the haunting Jacob's Dream (a Julie Lee-John Pennell song found on the compilation "A Hundred Miles or More") or Any Old Time, which the band recorded on a Jimmie Rodgers' tribute album fifteen years ago. The other surprise of the evening, at least to me, was that Larry Atamanuik is no longer manning the drum kit and percussion for the group; I must have missed that announcement. Also present was a keyboard player who, while not detracting from the performance of AKUS seemed a bit superfluous.

For me, all the highlights of the two-hour set (by the way, would an intermission kill the flow of the show? Dang that theatre was hot!) were exceeded by the four-tune encore performed around the single mic. Krauss returned with Block and Tyminski for a reading of When You Say Nothing At All, followed by Barry Bales joining to form a quartet for a gorgeous performance of Down to the River to Pray. This was followed by Douglas joining them for Your Long Journey and the closing There Is A Reason. A beautiful way to close a special evening of acoustiblue entertainment.

Well, mostly acoutiblue. Bales and Block had earlier broke out the electric bass and guitar for a pleasantly rambunctious Away Down the River, another surprise and welcome selection

The set list was balanced and well-chosen. Had I had the opportunity to contribute, I might have substituted in another Block song- maybe Shield of Faith- and Steel Rails. But, no complaints from me; the concert was near perfect.

A wonderful concert experience without doubt, well worth the late night drive home.

The band next performs in Washington, Bend, Oregon (yeah, Bend!), and Nevada for a short series of dates prior to taking a couple weeks off the road.