James Reams: The next phase

The other night, quite unexpectedly but even more gladly, I received a phone call from James Reams, founder and lead singer for James Reams & the Barnstormers.

Unexpectedly because James and I hadn't communicated in about ten months and gladly because he is one of my favorite people within the bluegrass world. 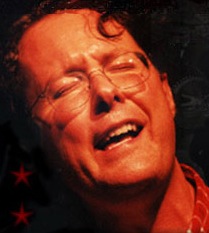 The Barnstormers' 2011 release "One Foot in the Honky Tonk" was one of the finest bluegrass albums of last year and certainly one of my favorites. A 15-song set, the album had been created together through a long series of recording dates, compiled a few songs at a time as work and family schedules allowed. It is a bluesy album, one that is every inch bluegrass but dripping with the blues and country sounds that informs it.

I had been honored and more than a little frightened the previous year when Kentuckian James asked me to consider writing the liner notes for the album. Listening to the album months before its release, I found the task to be psychologically daunting but really quite effortless. The words flowed naturally as the album unfurled as I listened.

However, after an brief, initial push, we didn't hear very much about James Reams & the Barnstormers and "One Foot in the Honky Tonk" last year. A shame, but not unexpected.

James' greatest supporter was his partner Tina Aridas. A very strong writer, Tina's forte was most definitely the written word, and it was her ability to communicate, to draw people into conversation through writing, that allowed her to create connections for James and his music.

Those close to James and Tina- and I count myself fortunate to have shared that distinction despite the miles that separated us- are aware that Tina had a long battle with cancer. She succumbed in early February, 2011 just before the finished copies of "One Foot in the Honky Tonk" were received.

Tina had been an tireless enthusiast of James and his unique bluegrass sound, spending many hours weekly maintaining contact with writers, promoters, radio hosts, and fans all in the interests of expanding and solidifying James' place within the bluegrass world. On top of that, she was a terrific lyricist and songwriter, having co-written several songs with James.

James and Tina had time to come to grips with her impending death, and I hope James doesn't take offense to my suggestion that she perhaps came to acceptance of her fate better than he did; based on my e-mail exchanges with Tina throughout 2010, she faced death with an understanding (and occasionally, an anger) that I found inspirational.

She was a heck of a person, the only true 'e'-friend I've had.

After Tina's death and a couple e-mail exchanges with James about her and "One Foot In the Honky Tonk," I didn't really know what else to say to the man, how to maintain a connection that was stronger with the departed than with the partner left behind. After all, he had just suffered an incredible loss, and I didn't feel he needed me scraping at his wounds. So I let the weeks and months pass until this week when James called me from Arizona.

As I stated, I'm so glad he picked up the phone.

While I dare not speak for James, talking to him it became obvious from his voice and tone that the loss of his beloved Tina continues to weigh heavy on him. Her loss has been hard on James, personally certainly but also professionally. James played his committed dates following Tina's death, but didn't book new gigs and didn't really work the album the way it deserved. Understandable, of course. Facing the devastation of a partner's death is challenge enough. On the business side, she was the promoter, the advocate. He was the talent. Often, these skills are exclusive of the other.

A retired school teacher, James has relocated from the Brooklyn base he shared with Tina. As James shared with me on the phone, when a trip to the grocery store becomes unbearable because of the memories associated with the departed, it is likely time to find a place to start over. With his mother in Arizona, James had good reason to head west, which he did this past September.

Purchasing a home in Litchfield Park, AZ, James has found the challenge of 'starting over' in an area where he had few if any musical contacts a challenge, but one that he is enjoying. He is again with family and is finding that his new home is just what he needed to begin the next chapter of his life.

2013 will mark the 20th anniversary of The Barnstormers. While James has left his compatriots on the east coast, the band remains a viable entity. Comparing the band's current situation to Chris Jones & the Nightdrivers - Chris lives much of the year in northern Alberta while his band members are much farther south - James feels it is workable for him to travel back to New York several times annually and rehearse with the band in anticipation of gigs. In late September, he is re-launching the Park Slope Bluegrass and Old-time Jamboree that he started in 1998.

James' move to this community just west of Phoenix also brought him into contact with musicians from the area, a situation that James has found to be invigorating. So while James will fly east to play dates with The Barnstormers and has a slate of dates upcoming with them from May through September, his collaborations with western musicians has also brought him new inspiration. It is with these musicians that James will next be performing, including a March 21 date at Altadena, Cal.'s Coffee Gallery Backstage.

Joining James and his Arizona friends will be Blaine Sprouse, a well-known fiddle player who was on the Grand Ole Opry for many years and whose playing can be heard on dozens of hit albums, on Alabama's "If You're Gonna Play In Texas (You Gotta Have a Fiddle in the Band)," and who was a Sunny Mountain Boy, a Blue Grass Boy, a Virginia Boy, a Dreadful Snake, a Cluster Plucker, and has shared the stage with many of the most familiar bluegrass names. Based in California for many years, Sprouse and Reams recently met up, played together, and have found a solid connection around which to base music.

I listened to "One Foot in the Honky Tonk" again today. And, as I have several times since Tina's passing, I shed a few tears in memory of Tina. But these were tempered with the knowledge that James Reams is alive and well, living in Arizona and making bluegrass music.

We should all be happy for him because we know that this is what Tina would have wanted for James- the opportunity to continue doing what has brought him such joy and pleasure throughout his life.