The words coming from Reba McEntire are simple enough - "Pray for Peace," which she sings over and over on a song posted on her Facebook page and web site. 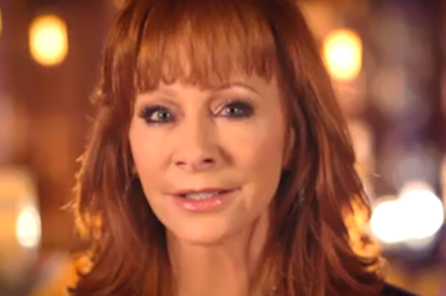 The accompanying video, which clocks in at 4:07, shows people from around the world from London to Katy, Texas to Las Vegas either giving a peace sign or else putting their hands together in a traditional prayer or both.

Eventually, nearing the half way point of the song, McEntire adds some words to the song, but the general idea is that people should "Pray for Peace," including for "our leaders...we got to pray for freedom."

A gospelly chorus sings behind McEntire's vocals with the title repeated over and over.

"The idea to write the song "Pray For Peace" came to me last year as I was walking on our place in Gallatin, Tn. For days I'd sing, "Pray for Peace", over and over. It wasn't until several months later did the other parts start to fall in place. Some, not until we got into the studio to record it," said McEntire, who is wearing a cross in the video.

"I feel this song is a gift from God. I have never worked on a song as long as this one. It went from a bass drum, fiddle and singers to guest artist singing with me, adding more instruments and even a choir and a bagpipe!"

"It's an act of perseverance, prayer, hope, fellowship and mostly love."

While the words may be simple, the theme and accompany video are most heartfelt. They seem ever more poignant these days when Israelis and Palestinians are shedding blood and innocent people are shot down in an airplane over Ukraine.

"We're asking for a miracle," sings McEntire at one point.

She may be right, but it's a most poignant message during troubled times.