The impact of Taylor Swift

Taylor Swift may not be topping the country charts these days with "1989," as she's on to bigger and better things, but Billboard has a piece on how the magazine's woman of the year "changed country music."

In an article that came out on Tuesday, Rob Tannenbaum wrote of Swift's influence on the genre in four areas. 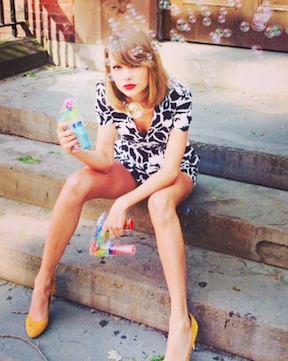 First was that "Country Went Pop." Tannenbaum pointed to the lack of traditional country music in country today, something not seen since the Olivia Newton-John and John Denver country era in the 1970's. The piece quotes Jason Aldean's co-manager Chris Parr as saying that Swift "certainly helped push that pop boundary out a little bit further."

True, but Swift also wasn't the one who changed it. There were a bunch of others before her leading the way. Some would argue it started with Garth Brooks of the recent change, although if you listen to Brooks now, he's far more country sounding than say Rascal Flatts, another leading pop country band. The list of acts that strayed very far from traditional country goes on and on with acts like Kenny Chesney and more recently Jason Aldean, Luke Bryan and Florida Georgia Line. Swift was simply one of many - albeit an extremely successful one commercially - who benefitted from the switch.

Perhaps Swift has shown with '1989" that it is impossible to switch musical gears and succeed commercially in an age where the lines keep getting blurred. Maybe Brooks would have been allowed to succeed today in another genre unlike when he adopted the Chris Gaines moniker and pretty much fell flat on his face.

Tannenbaum also opined that Swift helped lead the way towards the signing of younger acts. LeAnn Rimes was only 14 when she released her first disc, but that's already 18 years ago! There are teens out there now including Maddie & Tae and Hunter Hayes, who was 19 when he signed to Atlantic. The piece mentions Kacey Musgraves for some reason, although at 26, she's not exactly a youngster.

Yet, labels tend to be somewhat wary of signing acts deemed too young. It's hard for them to have staying power as they grow up and their fans may not grow up with them. There are not too Billy Gilmans out there, who strike it rich early and then have a hard time making it. The pop field is littered with teen stars, who saw their career fizzle.

Tannenbaum cited Swift for influencing the concept of singers writing their own songs. That was certainly emphasized by Swift's press team when her albums were released. It is now far more common for artists to write their own material. Heck, even George Strait started to record some of his co-writes decades into his career.

For some artists, it's a matter of money because they will get a bigger share of sales if they wrote their own material. Writing has always been key for Swift, and she deserves credit for that. Swift also used it to speak of her personal life and relationships, most of which seemed to go south. That, too endeared her with teenage girls, who may have been going through the some social pitfalls that Swift did.

Finally, Tannenbaum hones in on one very key area where Swift did have a huge influence - embracing social media. Her label, Big Machine, touted Swift as "the first bona fide country superstar of the Myspace generation." Myspace didn't have a lot of staying power, but Swift switched gears. Swift gathered her fans through Facebook and particularly Twitter, finding that as a useful method of interacting, capturing and keeping fans. As a result, she built relationships with them, something that has been part and parcel in country music.

That translated beyond social media for Swift where, for example, she hosted a small group of fans to listen to "1989" earlier this fall along with visiting fans and getting the publicity for it. Social media was part of the plan of community building.

Tannenbaum may be somewhat overstating it when he wrote, "there's no doubt that she changed the business of country music..." She clearly was out in front when it came to social media. Heck, even Brooks has embraced it - years later.

But in the other areas, she may have been at least part of what was already under transformation. It's far too early in her career to say that Swift will have a long-lasting impact on the music industry when it comes to the music itself.

What is clear is that Swift pretty much can write her own rules now. I, for one, await what she does with it and the possible influence she could have. Here's hoping for a dyed-in-the-wool traditional country album from Taylor Swift.