Long wait for McEntire is over

The long - make that ultra-long - wait for new music from Reba McEntire is over.

McEntire released her first new music in four years on Wednesday, "Going Out Like That." The song will be from her forthcoming disc, due out in April.

The song, penned by is about a woman, who, instead of wallowing in the heartache of a break-up, decides she's going to live life. It's not any big message type song, but is in line with McEntire's longstanding espousal of strong female characters. 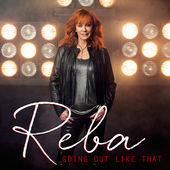 "When you listen to thousands of songs trying to find just the right one to record, a really great song jumps out at you. That's exactly what 'Going Out Like That' did to me. It jumped out because it's a great song with up-tempo sassiness!!! The first time I heard it, a man was singing the demo. When I sang it coming from a female perspective, it became a woman's power anthem. Sure hope you like it," McEntire said on Twitter.

After listening to it several times, it's not all that different from what McEntire has been doing for years. McEntire retains her Oklahoma twang vocal delivery ("It's been awhile since she put that red dress on," McEntire sings at the beginning) and sounds about as fresh as she always did.

Musically, this falls in line with what else is out there today in country music - there's a clear alignment with rock with screaming guitars two-thirds of the way through before McEntire's vocals start getting tweaked with. One could easily hear this being cranked up loud in concert (Reba, in case you forgot, is going to do a Vegas residency with her buds, Brooks & Dunn, who are getting back together).

The bottom line is that "Going Out Like That" is very much geared at putting Reba back on radio. What will be interesting to see is if McEntire suffers from ageism as she strives to return to her perch. McEntire, 59, is part of the Nash Icon label, a partnership between the Big Machine Label Group and Cumulus Media. The label is aimed at mature artists. Martina McBride and Ronnie Dunn also are on the label. In other words, they're going after artists who have enjoyed a great deal of commercial success, but are now are now facing daunting odds of getting radio play in what's a young man's game.

It may not be easy for McEntire to go up against the likes of Carrie Underwood and Miranda Lambert, although the fact of the matter is that there are very few female singers out there. At this point, "Going Out Like That" is not a career defining song by McEntire, but it may be enough to put her back on the airwaves.