Tyler and staying true to your roots

Steven Tyler of Aerosmith is the latest in a line of performers not necessarily raised on country, who are taking a stab at the genre. That list would even include such acts as The Rolling Stones," who released "Country Tonk" way back in 1969. In more recent years, Kelly Clarkson, Darius Rucker and Aaron Lewis have tried their hand at country with varying degrees of commercial success.

While some have seemed content on cashing in on a rising genre with a good chunk of failures, Tyler has some street cred at least. First of all, despite his wild antics, scarves and outsized and oversized personality, he is a music guy at heart. 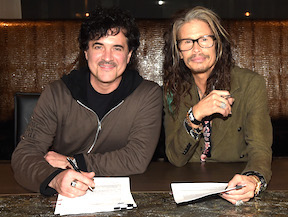 Aerosmith has been steeped in the blues, leading the band to take a left turn in recording "Honkin' on Bobo" in 2004. The decision wasn't the most obvious for a band that had wracked up the hits, but they pursued their passion.

One suspects that Tyler may be doing the same thing with his decision to record a country album with the Big Machine Label Group's Dot Records division.

Rolling Stone Country quoted Tyler as saying, "My earliest influences put me somewhere between the Everly Brothers and the Carter Family, and this project is all about me paying homage to my country roots," Tyler says. "I've been working with some fucking epic Nashville songwriters, getting my feet wet with the style and groove."

Tyler has been writing with Hillary Lindsey, Eric Paslay, Cary Barlowe and Jaren Johnston of Cadillac Three, according to Rolling Stone Country. Barlowe said one of the songs was similar to "an old classic Aerosmith love ballad" with acoustic guitar, mandolin and piano.

"Everything he sings is going to sound a little like Aerosmith, because he's the voice. But he's been talking about how he wants some of it to be organic," Barlowe told RS Country. "It's obviously not going to be traditional country or old-school country sounding, but he does want mandolin and a banjo in there, to change it up."

Tyler's history with country includes a duet with Carrie Underwood on "Can't Stop Lovin' You" from Aerosmith's "Music From Another Dimension!" in 2012. The band also recorded a B-side with Willie Nelson, "One Time Too Many" that appeared on "The Essential Willie Nelson." The song was recorded in 1987.

While Tyler is touting his country bona fides, he also was capable of putting out shlock with Aerosmith. Don't forget he was the voice behind "I Don't Want to Miss a Thing," which was a powder puff, big sounding, overly and overtly commercial hit for Aerosmith.

If Tyler is going to follow the commercial country acts out there in country today and go the easy route, his foray will be a musical disappointment to these ears. While his trademark vocals are enough to rough up most songs, that doesn't make it country. Tyler should pay attention to what he says are his country roots.