Does Reba really have be Going Out Like That?

For the cave dwellers out there, Reba McEntire has a new single, "Going Out Like That," another one of her songs about a woman overcoming a break up to live her own life.

By the end of the song, McEntire sings "Everybody, here comes the life of the party/Yeah, she is." 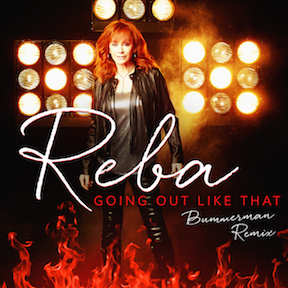 Now, McEntire has decided to take the song in an entirely different direction - as in EDM, electronic dance music. The song is referred to "Going Out Like That (Bummerman Remix)," and it's clear from the start that this isn't your typical Reba.

There are lots of tweaks and twists of the knobs along with a synth dance beat underneath. Her voice gets treated as well.

The song may be catchy in trying to appeal to more masses than the country market, but somehow the idea of going for the big beats and crossing over leaves me flat. Yeah, I know in this day and age that a lot of artists take what they can get, but somehow I'm not sure that McEntire needs to fold. Was this really her idea? It just doesn't sound like McEntire as we know her.

McEntire, of course, is not the first country artist to go the remix route, but that seems to be less of an occurrence these days fortunately. Somehow this is just getting too far away from country. At least Taylor Swift made it clear that "1989" was not a country album.

Bottom line, I'm just not sure why Reba feels the need to be "Going Out Like That."