Can Paisley, Avetts thrown down the gauntlet to the Stones?

The Rolling Stones are back touring again on the Zip Code tour this time around.

It should come ass no surprise that the Stones are not touring behind any new material. Unfortunately. In fact, their last full-length album of new songs was "A Bigger Bang" in 2005, only 8 years (sic) after "Bridges to Babylon" dropped in 1997. Since 1997, however, there have been no less than 6 releases of live albums, 3 greatest hits packages and 5 box sets. The last new songs came out on the greatest hits disc "GRRR!" in 2012. 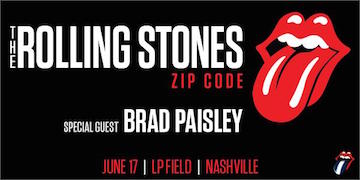 The tour starts in a few days on May 24 in San Diego and concludes July 15 in Quebec, Canada.

And if you're getting the distinct sense that I'm not overly excited, you'd be right.

But could prove to be far more exciting are the opening acts, particularly those in the country and Americana worlds. Brad Paisley is opening the Nashville show on June 17, while the Avett Brothers are handling the duties on July 1 in Raleigh, N.C. Other openers are Buddy Guy, with the bluesman being no stranger to the Stones. Ditto for Gary Clark Jr. And British singer Ed Sheeran, who is doing stadiums himself this summer in the States and is not country, opens in Kansas City.

Congrats to the Avetts and Paisley for getting the chance to open. Of course, they're getting exposed to a wider audience, and in the case of Paisley and the Avetts, a crowd that is not his typical band of supporters. (But in this day and age where whether you're rock or country or rap seems to mix and match, it may not matter). Paisley said that it's been awhile since he has opened a show, which presents its own challenges.

But who knows? Maybe the openers will upstage the Stones. When you keep playing "Satisfaction," "Brown Sugar" and other chestnuts and gems instead of pushing and challenging yourself even a teeny bit, it may not be so hard for the openers after all.

For Paisley and Avetts, it's their gauntlet to thrown down. Do your thing.