Over the past week or so, a few throwback stylists - one live and one on CD - staked their claim as relevant today. 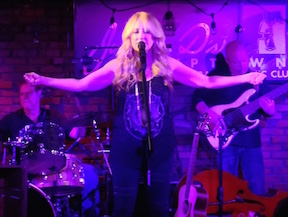 Both showcased why they are so worthy of the praise they have received. Musgraves continues in the same footsteps as her most recent release, "Same Trailer Different Park," in playing traditional country music with a lot of down home lyrics about the small town life and the people who inhabit said towns.

Musgraves hearkens back to the days of not so long ago when country songs used to be called story songs because the songs would outline life's ups and downs and were songs that we could relate to.

But somehow as country has gone increasingly mainstream and lost sight of its roots, the story songs pretty much have gone away as well.

So thanks to Musgraves' songwriting (along with those she penned songs with), the story song is back. She even name checks the small town where she grew up, Golden, Texas, in one song. Now, most of the time, her depictions are not all that pretty, but that's the price one pays for what could pass as reality. And she sure knows how to turn a phrase - lots of them that make you take notice.

As for Womack, she has done very little songwriting, but she sure seems to know what works for her. She released the commendable "The Way I'm Livin'" last year with lots of songs that were both traditional and religious-themed.

At 48, Womack is a vibrant singer, who doesn't need to have power vocal songs. You knew where she was coming from when she began the show with "Never Again, Again," a slow song about making the same mistake in love over and over again. It sure sounded like a country song to these ears.

Womack continued in that vein letting her voice carry the songs as her band was often filling in the gaps. For Womack, less was more.

Interestingly, in listening to "Pageant Material," one could envision Womack singing those very same songs.

Musgraves has not enjoyed a tremendous amount of success at country radio. "Merry Go Round" reached 14 and the left of center "Follow Your Arrow," which makes a clear statement about accepting gay relationships (something that used to not be very country, if you will) hit number 10. Neither seemed to be the type of song, though, that dominated the airwaves. As for "Pageant Material," it is the third best selling disc in the U.S. for any genre in its debut week.

At a time when it seems increasingly difficult for today's artists to pay respects to the traditions of country music, it sure is reassuring to know that singers like Womack and Musgraves are out raising the flag for tradition.