For The Band Perry, the times they have changed

The times, they are a changing. I listened to the brand new single from the Band Perry, "Live Forever," a few times today.

"Live Forever," which they performed on Good Morning America this morning, is big sounding and anthemic. Call it very very catchy. The kind of song that you can expect fans to be singing along with back to the band in concert. 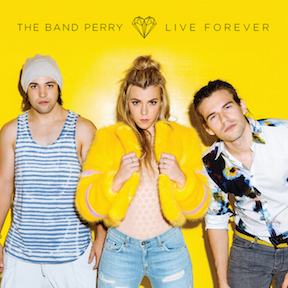 The song was written by a slew of folks including Kimberly, Neil and Perry plus four others. Country pop meister Dann Huff and RedOne (he also helped write the song), who's known for his work with Lady Gaga, produced.

I will be quite curious if the song gets played on country radio because it is not remotely country. Before TBP start breathing fire, that doesn't mean it's not a good song. "Live Forever," which describes the passion of a relationship, ought to do well on radio.

But it's a far cry from only a few years ago (March 6, 2011 to be exact) when the band (Kimberly actually) sent me an email out of the blue in response to a blog I wrote two days before, "The Band Perry: You are what you are."

Perry wrote in her email, "As we often say - we are The Band Perry and we play COUNTRY music. Trust us when we say, its the place we want to be." (FYI, she capitalized the word "country")

Okay, things change. Sounds change. Bands change. TBP is entitled to do whatever they want to do, of course. Taylor Swift did, although she was hardly traditional country by any stretch (I am happy to say I always liked her song, "Mean," on which she plays banjo)

As Reid Perry said this morning, the single is part of a "new era" for the trio. They worked with Pharrell and Diplo (Beyonce, Snoop Dog, Justin Bieber, Chris Brown) on the new disc.

Somehow, the change should not come as much of a surprise. The band always seemed to think they had more country bona fides than I thought were merited.

Again, it's their musical career (with a "little help" no doubt from their label, Big Machine). Just like four years ago, the music business is a difficult one, and artists must make decisions and live with them. Especially if they want their careers to "live forever."

Not sure the times are a changing. They've changed.