Next Women of Country, Nettles and sexuality

Parked outside the House of Blues in Boston last Saturday night was the big tractor-trailer for CMT Next Women of Country Tour. Jennifer Nettles is headlining with support provided by the most excellent Brandy Clark and newcomers Lindsay Ell and Tara Thompson. 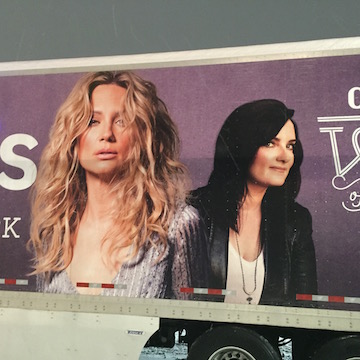 Nettles is on the road prior to the April release of her sophomore album while Sugarland is on hiatus. She is a seasoned entertainer - perhaps a bit too mannered - with a powerful voice that made you quickly understand why she has been on Broadway.

As for the tour, to be honest, I had not read the promo material about it, but I would strongly suspect that the idea is to let women share the spotlight all night long from opening to closing. Sisterhood is powerful. 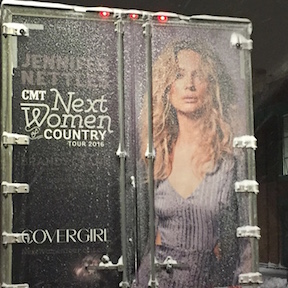 This is particularly worthy and understandable, given the lack of women on the country charts. Last year, for example, only seven women released country albums - Kacey Musgraves, Reba McEntire, Cam, Jana Kramer, Ashley Monroe, Kelsea Ballerini and Maddie & Tae (unless you count a few EPs from the likes of Maren Morris and Mickey Guyton). Only Ballerini, Cam and Maddie & Tae were new acts.

The seven enjoyed a few hits, and Musgraves is getting lots of kudos even if she is not getting commercial radio play. Yet, it was quite clear that they are perceived almost an afterthought compared to the bro-country folks, who rightfully got their comeuppance with negative press last year.

It's all good with the push for women to more of a force in country, but back to that truck.

Is that the image that Nettles really wants to portray to the public - especially women and perhaps young women, even high schoolers in particular - as some sort of role model where you have to look sexual to look good, be attractive and have a sense of self-worth?

That's not what this tour ought to be about. I get it that the tour needs sponsors to make it happen. Having Covergirl as a sponsor makes sense, given that they manufacture beauty supplies.

What didn't make sense is how while promoting women for their musical prowess, the artists - more pointedly Nettles - should also understood the role and persona they play when not on the stage. Nettles should have known better, unless this is the look she wants to put out there.

If this is what the Next Women of Country Music tour is about, Nettles, unfortunately, bought into the wrong idea.