At the ACMs, it's all about Stapleton

To say that the Academy of Country Music awards was Chris Stapleton's night on Sunday would be an understatement. Sure, Jason Aldean was quite thrilled, as he should have been, in taking the Entertainer of the Year Award, but Stapleton may have required a helping hand to take the six trophies home.

Stapleton won honors for Male Vocalist of the Year, New Male Vocalist, Album of the Year for "Traveller" (he also got an extra one for being a producer) and Song of the Year for "Nobody to Blame" (another extra for helping write the song). The next closest were Miranda Lambert and Little Big Town with two apiece, and they actually shared an award for Vocal Event for "Smokin' and Drinkin'." 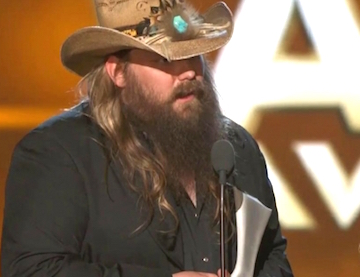 Stapleton was his usual very low key, humble and kind self in giving his short speeches thanking everyone. One doesn't get the sense this has gone to his head. I know I've said it before, but I suspect this whole this thing has been totally mind-boggling for Stapleton.

Certainly, he has the credibility as a musician for his songwriting and singing (check out his efforts with The SteelDrivers), and that comes through on "Traveller" as well. Until he started winning awards at the Country Music Association in November, no one was much paying attention to him. He had no hit singles - he still doesn't, although several have charted.

And he is not what passes for country music these days either, even though his style is far more traditional than just about everyone out there.

Stapleton's wins were not a surprise to me as I thought he'd take the Male Vocalist and Album of the Year. I would have predicted New Male Vocalist as well, except that was announced before the big show on Sunday.

Frankly, I was surprised about "Nobody to Blame." I thought Little Big Town's "Girl Crush" would take it, given that it was a massive hit with a bit of controversy around it and was a left of center song. "I do not see them having chance," I wrote on my Friday blog of the song along with Eric Church's "Raise 'Em Up" and Eric Paslay's "She Don't Love You." Two out of three ain't bad.

Another ubiquitous radio song, Thomas Rhett's "Die a Happy Man" did win Single Record of the Year as I thought he might. It's interesting how one song that got a lot of play won, while another did not.

Little Big Town's win for Vocal Group of the Year was no surprise either. "Girl Crush," of course, elevated them a lot. Well deserved, although it's not like they had a lot of competition either.

Lambert, of course, won Female Vocalist. I thought she would take it, but I also could see Kacey Musgraves in an upset as she's done well in awards shows as sort of the female Chris Stapleton (left of center, not a big hit maker, but putting out a lot of quality material). Carrie Underwood also could easily have won, but Lambert just seems to do well at awards shows. There's no getting around that. And she is deserving, of course, with a lot of top-notch songs and ever improving in concert.

Ultimately, the night was all about Chris Stapleton. Once again, well deserved.