The death of Guy Clark this week at 74 struck a chord. I had the fortune to not only listen to his body of work over the years, but also the chance to see him live a number of times.

Clark was part of the great line of Texas singer/songwriters that I was fortunate to catch live and listen to on recorded materials, but he was just about at the top. He was a songwriter, who told stories. He may not have had the most beautiful voice, but he also knew how to use it to his advantage as his songs conveyed pictures that came alive. Just give a listen to his best-known song "L.A. Freeway," about the fast life of Los Angeles not being for him. Clark, who lived there for a year, sings, "Adios to all this concrete/Gonna get me some dirt road back street/If I can just get off of this LA freeway/Without getting killed or caught/I'd be down that road in a cloud of smoke/For some land that I ain't bought." 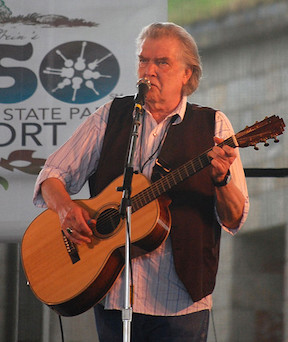 The song was relatable and real to anyone who has ever been to La La land, even as a visitor.

Clark said in a 2006 story in Country Standard Time that he created characters first and then the story. ""Like 'Desperados Waiting for a Train,' I knew exactly what that guy looked like," says Clark. "Sometimes you have to use your imagination. But you know, it's songwriting, not brain surgery. We're supposed to be having fun."

Those images were also quite apparent in the personal song "The Randall Knife" and the fun "Homegrown Tomatoes," both from 1983's "Better Days." I loved "She's Crazy For Leavin'," a song he wrote with Rodney Crowell, who turned it into a hit. Vince Gill recorded "Oklahoma Borderline," while both Brad Paisley and Alan Jackson covered "Out in the Parkin' Lot," which Clark co-wrote with Darrell Scott.

The last time I had the chance to see Clark live was at the Newport Folk Festival in 2009. It was a treat to see Clark again with guitarist Verlon Thompson. Clark's voice had weathered, but it was the songs, such as "LA Freeway," that stood out that Sunday afternoon. I wrote words that were always true about Clark: "As always, Clark painted great stories with his words."

We were all better off for the musical life of Guy Clark. In taking a look at his lyrics, the close of "Homegrown Tomatoes" may strike close to home this week:

"If I's to change this life I lead/I'd be Johnny Tomato Seed/'Cause I know what this country needs/ Homegrown tomatoes in every yard you see/When I die don't bury me/In a box in a cemetery/Out in the garden would be much better/I could be pushin' up homegrown tomatoes."

I'm not so sure Clark turned out to be the great prognosticator about his own passing, but, instead, of the tomatoes, we are left with Clark pushing up his songs. Thanks Guy Clark and RIP.

Photo was taken by William Wallace of Austin at Newport Folk Festival, 2009.