In this day and age of bro country and country songs that don't cut particularly deep, it was refreshing to hear Brandy Clark's new disc, "Big Day in a Small Town."

While Clark makes some concessions to the mainstream in terms of the sonics (it's less traditional than her excellent debut, "12 Stories" from 2012), there is no doubting that Clark is one fine songwriter. 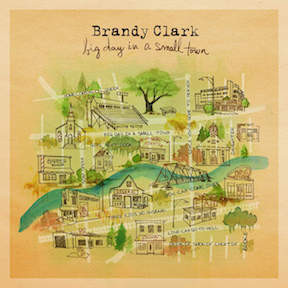 Clark tells stories in her songs (remember when you used to have that in country?). She has the gift of being economical with her words, like any good songwriter must be, while quickly telling stories that paint pictures.

Perhaps none more so than the closing song of the CD, "Since You've Gone to Heaven," a song she wrote with frequent collaborator Shane McAnally. Clark sings to a father figure, who, unfortunately, has passed away.

The song is not a pretty one. The brother is in jail. The sawmill in town has shut. Life is tough. Clark tones it down musically in an acoustic-based song, the best of the 11 songs.

The pictures keep coming on songs like "Drinkin', Smokin' Cheatin'," "Three Kids No Husband," first heard on Lori McKenna's "Numbered Doors" disc (McKenna co-wrote the song with Clark) and the title track, among others.

I would have preferred that Clark maintain a more traditional sound as she did on "12 Stories." The sonics here are bigger and meatier, more mainstream, but this disc is a keeper. There's plenty of quality material. And even the more mainstream still work.

Clark often has been grouped with the likes of the very traditional Kacey Musgraves, and it's easy to see why. While not perfect to these ears, the long wait since October 2013 for "Big Day in a Small Town" was well worth it.