It's beginning to feel like A Very Kacey Christmas

Holiday albums are not high profile affairs these days. It used to be that Christmas and seasonal discs were part of the fabric of being a country artist.

But presumably due to the short duration of self space that the music occupies and an obviously limited sales period, the number of holiday albums being released has grown exceedingly small. 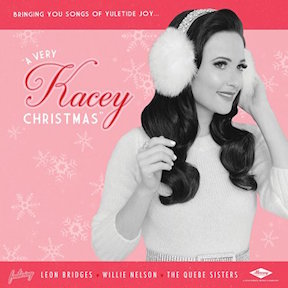 Despite that, I am intrigued by Kacey Musgraves, who announced this week she would be out with "A Very Kacey Christmas." I'm going to take her at her word and assume she sticks to what got her where she is - a traditional sounding country disc with some bite to it. That would be "Very Kacey' in my book.

Musgraves, who dresses in traditional country fare (you don't see that so much any more either) and her brand of traditional country has been a brand of fresh air with the release of "Same Trailer Different Park" in 2015 and last year's very fine "Pageant Material." Musgrave also hasn't been afraid to push the envelope in songs like "Follow Your Arrow." Interestingly, she is not burning it up on commercial country radio, but she has forged ahead anyway.

Musgraves is putting out the Xmas disc on Oct. 28 with help from Willie Nelson and Dallas soulster Leon Bridges. While Musgraves will take a stab at such staples as "Have Yourself a Merry Little Christmas," "Let It Snow" and "Rudolph the Red Nosed Reindeer," she also wrote four of the songs. Among them is "A Willie Nice Christmas" with Nelson and his guitar Trigger aboard on the recording.

Musgraves got the voice and vibe, but she also will have to put her own stamp on the songs and make something old sound new. Here's hoping for more good music from Musgraves.