Dierks Bentley is releasing a new album, "Up on the Ridge," in June, his fourth disc for Capitol Nashville. But it's not going to be like this other discs. I liked his music from the get go as he doesn't mess around (too much) with putting a rock sheen on his brand of country music, and he puts it across quite well live. 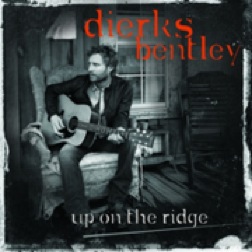 The reason that this is different is because the music comes from the heart - it's bluegrass music. When he is around, Bentley has been a regular at the Station Inn, the bluegrass club in Nashville. He also has done several bluegrass recordings, showing that this foray is not some gimmick.

The 12 songs include covers of Dylan (Senor (Tales of Yankee Power), Kris Kristofferson (Bottle to the Bottom and U2 (Pride in the Name of Love) plus 5 songs Bentley helped write.

Like any good bluegrasser, Bentley is not afraid to get some help. Alison Krauss is on the title track, which Bentley co-wrote with Angelo, along with Draw Me a Map. Chris Stapleton, who just left The SteelDrivers as lead singer, sings background vocals on Fallin' For You. The Punch Brothers featuring Chris Thile guest on Senor, Rovin' Gambler and Pride. Del McCoury guests on the latter. Miranda Lambert and Jamey Johnson are featured on Bad Angel

If you were to see so many folks on a country album, you'd wonder if it was done in an attempt to give the music a much needed shot in the arm, but that is not the case with bluegrass where guests typically help out.

Bentley soon heads out on tour, doing 24 shows in 30 days to preview the new music.

What is most exciting about the project - and I say this without having heard one note - is that Bentley is following his heart. Chances are the disc is not going to get the sales of his previous disc because of the type of music that it is, but that did not dissuade Bentley. And kudos as well to Capitol Nashville for going along with the project.

In this day and age, where almost everything in music seems way too bottom line oriented, it is quite gratifying to see Bentley take control of his own career and reach his goals, even if they are not guaranteed to leave the cash registers clicking.