When the list of Pulitzer Prize winners was announced today by Columbia University, some of the usual suspects were there - the Washington Post and the New York Times. But there was one name that stood out like a sore thumb.

I can't say that I ever thought of Hank Williams as being part of the Pulitzer crowd. But there he was - receiving a Special Citation from the school. 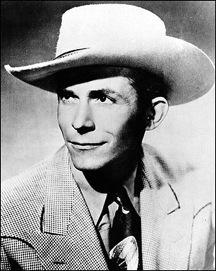 Williams' inclusion was part of an effort by the powers that be to recognize non-classical musicians. They have previously given it to Bob Dylan, John Coltrane and Thelonious Monk.

While quite surprising, giving the honor to Williams was extremely gratifying, especially when you consider that classical and jazz have always been considered far more intellectual styles of music compared to country.

Here, he was this hillbilly cowboy who spurred country on with a slew of excellent songs and a great influence decades after his death. Needless to say, it always seemed tinged with sadness when discussing Williams since he died at 29. But five plus decades later, the impact of Hank Williams burns brightly. Winning the Pulitzer - a legitimate honor compared with the typical awards shows - only burnishes that greatness.