The idea of an artist having longevity these days is a rare bird indeed. All too often, a singer or band is here today, gone tomorrow or maybe even the same day. The bottom line is all important, and record labels are scrambling to figure out a way to make money whether it's ringtones or placement in movies and TV shows to keep the green machine turning. Whatever happened to the idea of music as art? 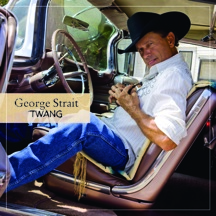 So, it is with utmost respect that we look at the career of George Strait. Billboard announced today that Strait accomplished what no other artist in the history of Billboard charts has - 30 years of consecutive Top 10 hits. With his current single I Gotta Get to You from his excellent "Twang" CD moving from 12th to 9th on the radio airplay list, the traditional country singer has 82 Top 20 hits with 2010 being the 30th year that he has reached that mark. Strait reached the Top 10 in 1981 with his first charting single, Unwound.

Strait has been rock solid without sacrificing his sense of art for something commercial. Yes, he has ventured into a few different styles with a Mexican and tropical beats, but you're not gong to hear Strait going for loud guitars. Pedal steel is more to his liking, and that's just fine with us.

"It just continues to be one heck of a ride that I'm enjoying every minute of," said Strait. "Time does fly when you're having fun. Thanks to all of my fans for their support. Long live country music."

Strait has the most number 1 singles of any artist in history including Elvis (57 thus far, including all charts). He has sold more than 68.5 million records and with 33 different platinum or multi-platinum albums has the most RIAA platinum certifications in country music and the third in all genres, behind The Beatles and Elvis Presley.

It's been said time and again that an artist should remain true to his or her roots instead of chasing the commercial brass ring. We see that way way too often today where you get the sense that some artists would have been better off going for a more country sound instead of watering down the music to appeal to the masses for an album or two. That may work for awhile, but it's great to see that the art actually does matter to Strait.

Long live the king of country.