If you just can't get enough of Taylor Swift, fear not. That's because the 20-year-old country star is going to be out with a comic book in July, "Fame: Taylor Swift." The 32-page biographical epic will sell for $3.99. 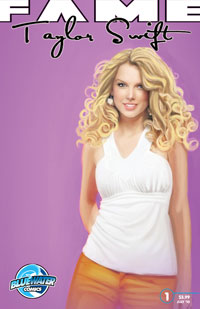 Swift is living up to her name - that is for sure. Once she got her music machine rolling, there has been no slowing her down. Musically, she has been going full force for several years - her debut album, a remix of the debut, an exclusive holiday disc for Target, "Fearless," a tour opening for Keith Urban, her own tour, etc., etc.

She also has branched into movies, although she was not in a movie ("Valentine's Day") exactly ready made for an Oscar (it should be pointed out that Swift garnered some good reviews) - it's at 18 percent approval rating on Rotten Tomatoes right now. Swift also has turned in good performances on Saturday Night Live, showing that she possesses stage abilities.

Obviously, Swift can do whatever she wants with her career, but one wonders if she's spreading herself too thin too soon, particularly on the commercial end. She has a dizzying array of activities going on - a Taylor Swift singing doll, greeting cards through American Greetings and more.

Fortunately for Swift, she seems as if she has her head on straight and is not some temperamental performer. That's especially good given her huge financial empire now in existence. But Team Taylor should raise the question of whether she's out there too much, something that could contribute to a backlash, perhaps far stronger than the one she received after her dismal singing performance at the Grammys.

These are not easy decisions, particularly in this economic climate with the music business in the tank. Perhaps that has contributed to Swift's efforts to spread her wings. Whether she can fly or not is a different story.