Chely Wright is gay. She made that announcement this week in an interview with People magazine on the eve of the release of her book and a new record album, "Lifted Off the Ground." 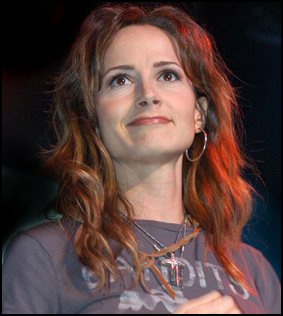 Wright, 39, will get a lot more publicity to say the least for coming out than her album would have otherwise. Wright's a good singer, but her career has waned somewhat since earlier success with Shut Up And Drive and Single White Female.

About the only particularly well known country singer to announce they were gay was kd lang, and she was nowhere near as tied to the Nashville scene as Wright has been. In fact, over time, lang strayed away from country for other musical forms. Rumors, of course, have circulated over the years about Kenny Chesney, but he has denied them.

Other artists have announced they are gay including Ricky Martin, Melissa Etheridge, Tegan & Sara, George Michael, Adam Lambert, Clay Aiken and Elton John, but none were country.

Wright has not been heard of all that much in recent years. Until now.

She was quoted as saying, "There had never, ever been a country music artist who had acknowledged his or her homosexuality," Wright told People.com. "I wasn't going to be the first."

"Nothing in my life has been more magical than the moment I decided to come out," said the Kansas native.

Kudos to Wright for having the guts to make the announcement. Obviously, this is a very personal issue, but one that Wright must have been wrestling with for years. Whether that hurt her career or not, who knows? Whether this latest news will help her career or not, who knows? It will give her a lot more publicity -that's for sure. Why else would the Today show have her on?

Ultimately, of course, it will be her music that must stand on its own. It's not as if she's going to get a free pass because she's gay or straight.

Regardless of how well Wright's career does or whether the CD is any good or not, she deserves a tremendous amount of credit for having the guts to make her sexual orientation public. It's long overdue in country. Hopefully, her action will eventually lead to the issue being a non-issue.