The Court Yard Hounds had the seventh best selling CD in the entire country with their debut. If the name doesn't ring a bell, maybe the members of the group should. 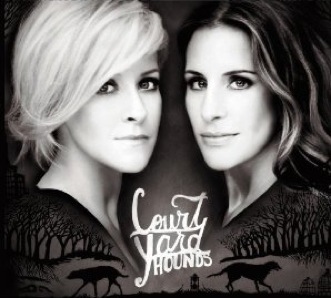 Emily Robison and Martie Maguire, sisters, who are best known as two-thirds of the Dixie Chicks, comprise the Court Yard Hounds. Their sound is akin to the countryish side of Sheryl Crow. There are a lot of good, high quality songs on the disc. And while Natalie Maines takes the leads for the Chicks, these sisters are no slouches when it comes to singing lead vocals.

But alas you will not find the CD on the Billboard country album chart even if it sold 61,000 units, which would have been good for second on the country side. Why is that? One can only conjecture that the Hounds said they didn't want to be on the chart, but it doesn't seem as if the band ought to have any say what chart they would appear.

And to say they shouldn't be on the country chart for the music they play, that seems far-fetched also.

Let's face it... the Hounds are not going to get played any more on the country radio stations than their regular night-time gig does these years. Too bad because the album is of quality and has a lot of fine songs. But rest assured the sisters have no interest or desire to played on country, so the feeling is mutual no doubt.

But for those who are into the Chicks, fine singing and songs, check out the Court Yard Hounds no matter where they chart.