The Farewell Drifters show their stuff

The Farewell Drifters are a band that has been under the radar screen. After all, they play bluegrass music and are on their own label instead of one of the bluegrass labels. But their profile also is on the rise and deservedly so.

The quintet from Nashville, who have a bit of a country bent to their music, just released a new disc on Tuesday, "Yellow Tag Mondays," which sounds real good. Not only do The Farewell Drifters write a lot of very fine songs on their own, but they do a stellar turn on the The Beatles' For No Good. Lead singer Zach Bevill, a Belmont University grad, is a good singer as well. 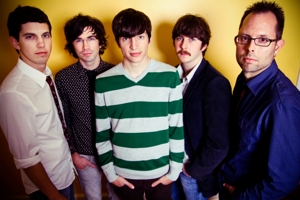 And this is a band that tours - there's a lot to be said for that these days with a tough economy and an ever worse music business. The band plays clubs - they did a few shows with Elizabeth Cook in Atlanta and Birmingham, Ala. - and festivals.

The group played their first proper Boston area show Wednesday night at a good eclectic club, Johnny D's. They didn't pack them in - there were perhaps 50 or so people there at the peak, but you have to start somewhere and let it build from there.

Over the course of two sets, The Farewell Drifters showed that they are indeed a worthy band with a lot of good songs and playing.

It's great to see bands like the Drifters out there bringing their music on the road. Congrats to the Farewell Drifters. We recommend catching them when they're in a city near you. But meanwhile give them a listen because they deserve it.