The Country Throwdown tour was real good in concept. After all, Kevin Lyman of Warped tour fame is the guy behind it. So, you know it's going to be edgy, right?

Well, not exactly, and maybe that's part of the problem in the inaugural year of the festival, which ended Sunday in Mountain View Cal. (I dare use the expression "first annual." That phrase has always bothered me. Have a second event before you start calling it annual) 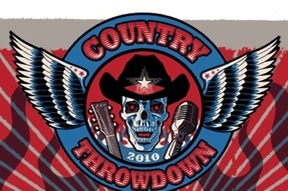 That became crystal clear to me in reading Dan MacIntosh's review of the Irvine Cal. show from Saturday.

Amazingly enough - or at least what MacIntosh saw of the event since the event was staged on multiple stages - he did not hear one fiddle all day long. Ah, I thought this was a country music fest where fiddle is supposed to be part of the sound.

But I guess that's not the case when you have folks like Montgomery Gentry, Jack Ingram and Eric Church playing. The bottom line is that these guys are pretty mainstream, and Montgomery Gentry and Church lean far more words rock than country.

Jamey Johnson held down the country fort and epitomizes what some of us probably thought this whole Country Throwdown thing would be about at least when considering Lyman's involvement.

I would suspect that if the Throwdown included a few more harder core country folks like Gary Allan or Dierks Bentley for example, at the top of the bill, it may have done better. Ryan Bingham and the Dead Horses were about the only known band with much edge to them on the entire lineup. A few more like them would have been welcomed. What about having someone like country/bluegrass band The Grascals, who would have worked well in this setting?

Most of these fests are learning experiences, and one presumes that Lyman has been through this before and will hopefully make the necessary changes next year.