Deja vu all over again and again for Trailer Choir

The first Trailer Choir full-length CD - "Tailgate" - was just released this week, but there's a feeling of deja vu all over again with this trio.

The group consists of lead singer Butter (aka Marc Fortney), who has a nice voice. Crystal (Hoyt), the blonde chick in the group, lends harmonies. And then there is Big Vinny (Hickerson), supposedly tipping the scales near the 400-pound mark. His shtick is he wears overalls and sings and dances - belly-first - to the ground. 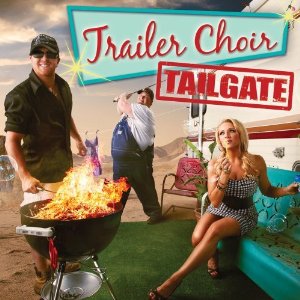 In November 2008, the trio released a digital only EP with the songs Off the Hillbilly Hook, Rockin' the Beer Gut, Rollin' Through the Sunshine and In My Next 5 Beers.

Last year - on June 9, 2009 to be exact - Trailer Choir released an EP called "Off the Hillbilly Hook." They gained traction with the first song of the six - Rockin' the Beer Gut. You can tell by the name of the song that this is a group that is big on being humorous. Whether the novelty approach would work long-term is debatable.

The Choir also gained airplay with the last of the six songs, Off the Hillbilly Hook, a song which first appeared in the 2008 Toby Keith film "Beer for My Horses." Keith owns the label that signed Trailer Choir, Show Dog Nashville (Keith has since done a deal with Universal, so Trailer Choir is on Show Dog-Universal). Also on the disc were - surprise surprise - Rollin' Through the Sunshine and In My Next 5 Beers along with new songs What Would You Say and Last Man Standing.

Which leads us to "Tailgate." For the third release in a row, Trailer Choir diehards can hear Off the Hillbilly Hook, Rockin' the Beer Gut, Rollin' Through the Sunshine and In My Next 5 Beers. In other words, every song on the November 2008 digital EP is here. Throw into the mix Rollin' Through the Sunshine and Last Man Standing from last year's EP.

I must say this leaves me with some head scratching. In a digital world, it doesn't matter all that much since you're not going to spend your 99 cents apiece on five songs you've already gotten elsewhere if you really like these guys.

But on the bricks-and-mortar side, Trailer Choir and their label should be red faced to put this out. On what basis could they be putting out four songs for the third straight release? They might as well have just put this out as an EP with the five new songs or perhaps if lacking any more worthy songs, put a live cut or two on here.

I understand that labels are up against it big time these days and trying to figure out however they can to keep their heads above water, but a little bit more creativity could have gone into releasing Trailer Choir's full-length debut particularly because half of it isn't.