A night to remember in Nashville

Tuesday was a night to remember in more ways than one in Nashville. For starters, the Grand Ole Opry returned to its home following the floods that wrought havoc on Nashville back in may. The Opry building suffered from the foods as well. 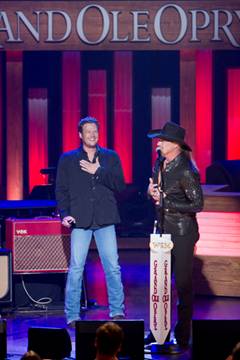 The show always went on, of course with the Opry being housed in a few different venues, but after reconstruction and renovation, it was time to go home again with a star-studded show started off by Little Jimmy Dickens and Brad Paisley singing Will the Circle Be Unbroken.

But it was a special night for Blake Shelton also because he got asked to join the Opry, perhaps the highlight of any performer's career. Trace Adkins did the honor of inviting Shelton ( a current member asks the prospective member if he would like to join) in a funny way - by presenting the message in a Tweet to Shelton as Shelton's a big Twitter user.

Shelton followed suit like other performers, and he will become a member in late October. He is the first artist asked to join since Montgomery Gentry did in June 2009.

One wonders if this is the start of asking more performers to join - how about getting Miranda Lambert joining if her fiancé is a member. Chances are others are likely to follow as the Opry tries to remain relevant to a new generation.

Shelton has been around awhile now - he's been charting since his very first single, Austin, went number in 1 in 2001. Some would say it's been a long time coming. Whatever.

Congrats to Shelton joining the esteemed country, and let's hope he remains true to country's roots.