Sorry to tell you this Sugarland, but...

I feel bad for the folks handling country publicity for Sugarland's new CD, "The Incredible Machine." Sort of.

To be honest, I was never a huge fan of the band anyway. They just didn't do it for me musically, even though they did for a lot of other people. For some reason, their songs just never spoke to me. 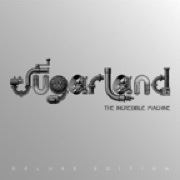 Those behind Sugarland must be wringing their hands figuring out how to possibly market this new CD as a country disc. So many other acts masquerading in country at least have music somewhat resembling country somewhere. Like most a lot of Sugarland's music, this one isn't country, except way more so.

I know what some consider to be country music these days ranges far and wide, but this is basically a pop rock record from a band that had success in the country genre. Therefore, this must be a country disc.

That's apparent from the opening track, All We Are where Jennifer Nettles seems to be channeling her best Jon Bon Jovi. And not the country leaning Bon Jovi, although I never much thought of Bon Jovi as being country flavored anyway even though they sort of were for awhile a few years back.

The title cut may start off as being within what could pass today (somehow), but then the pace picks up and it's really a softer rock sound.

The single Stuck Like Glue may start off at least leaning country with acoustic guitar (funny how acoustic guitar passes for being country these days), but then it rapidly degenerates big time with Nettle's pseudo reggae rap. Not clear why she thought that would be a musical step forward. Instead, it comes off as an attempt to sound somewhat hip or contemporary, but fails miserably on all counts.

Nettles repeats the reggae shtick later on A Girl Like Me with its tropical sounds as well. How about leaving the Caribbean feel to someone who knows how to do it right (aka Kenny Chesney)?

Tonight is a big power ballad where Nettle's voice gets a chance to shine, but country?

Find the Beat Again is pure power pop - catchy, but big sounding pop with a Blondie inflection to Nettles' vocals.

There are a lot of easy answers here as well. Stand Up speaks to helping those in need with some vague call to "stand up and use your voice." For the down on love Little Miss, "it'll be alright again."

Not to mention bad lyrics as in "The Incredible Machine":

Byron Gallimore produced the disc with Nettles and her sidekick in Sugarland, Kristian Bush, but unlike say his work with Tim McGraw where you get a sense there's some country in the music, I'm hard pressed to say the same here.

There are lots of problems with "The Incredible Machine, but chief among them is calling this country.