Garth Brooks hasn't played in Nashville since 1998 amazingly enough, but the country superstar, who spends a chunk of time in Vegas these days, is coming back to the country music capitol. Brooks is playing nine shows in December to benefit the flood victims of May's terrible disaster. 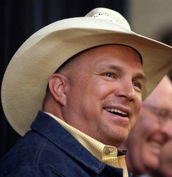 Brooks originally was slated to play one show on Dec. 17, but once that was selling big time on Saturday when tickets went on sale, he added shows. He kept adding them until he reached a total of nine. The shows will be held Dec. 16-17 and 19-22 at the Bridgestone Arena in downtown Nashville. Brooks will play two shows per night on Dec. 16, 21 and 22.

While reports were that all nine shows went clean, a check on Ticketmaster late Sunday afternoon, indicated that tickets were available for various shows.

The shows will feature Brooks playing with a full band along with his wife Trisha Yearwood. I suspect that they will not be the only country folks showing up on those nights.

Brooks, as he has before, priced the shows right. Tickets are $25 with 140,000 tickets sold. That means the concerts are slated to raise more than $3.5 million who suffered from the May floods.

Brooks plays solo acoustic shows in Vegas, something he has done since last year. He has been off the concert trail for years because he refused to tour while his three daughters were growing up. This also is not the first time he has helped out the needy. In 2007 he played benefit concerts in California to aid victims of wild fires.

Congrats to Brooks for stepping up to the plate and helping out those in need.