One of the annual rites of the country calendar - the Country Music Association awards - are coming your way Wednesday night.

So whether Miranda Lambert will rack up a lot of awards to match or come close to the amount of nominations she received (nine) is obviously debatable, but I am concerned about the show itself.

Is it going to be over the top with the emphasis on shtick and people hanging from swings as Martina McBride did unfortunately on one of these awards shows or are the powers that be going to bother paying attention to the music?

The inclusion of Gwyneth Paltrow, of course, is not window dressing. She sings the title track of the upcoming movie she is in with Tim McGraw, "Country Strong," and I thought she did a mighty fine job in singing it. Let's see how she does live with Vince Gill helping out.

Keith Urban is teaming up with Brad Paisley and Carrie Underwood for something. At least, that seems to be the case if you can believe a photograph Urban posted on Twitter. 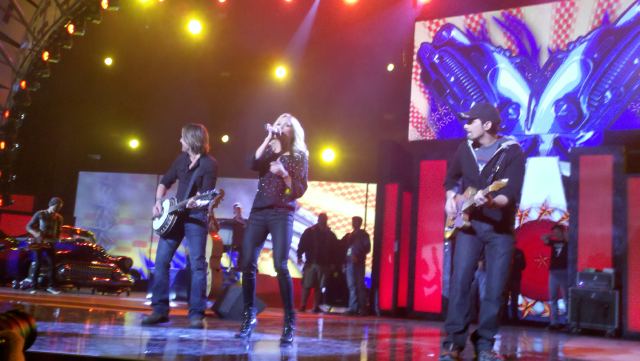 Lord knows that these events were not Taylor Swift's best musical moments, so let's hope that her singing now is a match for the quality displayed on "Speak Now," which was very very high.

It would be asking for too much to have any musically transcendent moments, but if the bells and whistles (read "silliness") are kept to a minimum, we will all be better for it.