The biggest award of the night at the Country Music Association awards, of course, is the final one - the Entertainer of the Year.

Voters had a chance to pick from among Lady Antebellum, Miranda Lambert, Brad Paisley, Zac Brown Band and Keith Urban. Last year's winner, Taylor Swift, was shut out this year (don't worry though. I can guarantee you she will be back in this category next year and can't imagine her not winning). But that's next year, and this is this year. 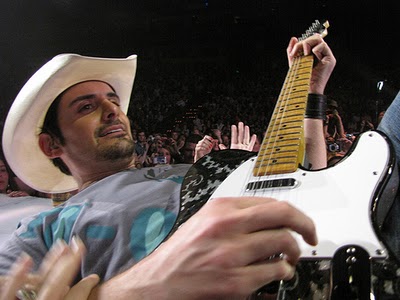 Needless to say, all are worthy. When the competition gets to this level, that's the way it always seems to be. It's not like some band or act that hasn't achieved a lot during the period is going to come out of the blue and get a nomination for the most prestigious award of the CMAs.

I'd have to say my favorite is Brad Paisley for about the same reasons I enunciated in why I thought he should take the Male Vocalist award. He had an excellent disc last year with "American Saturday Night," which yielded four big hits. He knows how to be funny in song, while at the same time showing his instrumental prowess (he consistently includes instrumentals on his releases) to singing to being an excellent musician. That carries over to his live concert performances as well. He is a natural. This guy did not need to attend Country Performer 101.

Lady Antebellum quickly has arisen to be one of the leading bands out there after two albums. They're not the most country of acts - pop is more like it, but they're good at what they do. If only "Need You Now" were a better disc. Too many songs did not cut very deep. Still with all the success they have enjoyed this year from headlining to the huge sales of the disc, Lady A has a fighting chance for this award.

Urban won't be "Defying Gravity" if he wins it because that CD did extremely well also. Like Paisley, Urban can play the guitar. He opts more for the pop end of country for sure as well, but his career has steadily grown.

Don't discount Lambert, who has enjoyed a big year. She's getting played, headlining shows as well and has enjoyed several excellent singles (Only Prettier, The House That Built Me and White Liar) from "Revolution." She's a lot different than the other female country acts out there now, sort of blazing her own trail.

Zac Brown Band keeps coming up with the hits in their musical polyglot - country, rootsy, jammy with an easy going sound. The band has worked hard to get where they are, but I think they'd be hard-pressed to get the top honor.

So, I go with Paisley, but believe me, if someone else takes it, that'd be no shock either.