Urban rides the rails to Get Closer

It was quite the day on Tuesday for Keith Urban as he took to the rails to push his brand new CD, "Get Closer."

Urban seems to be following in the footsteps of other artists when comes to promoting their CD on release day. In fact, Urban brings Taylor Swift to mind in considering methodology. 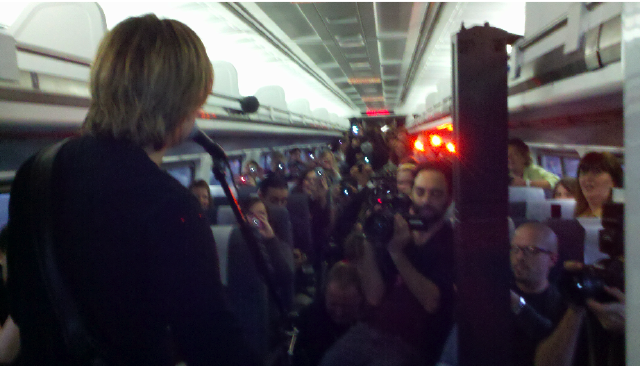 If you recall, last month, Swift got together with her fans on a flight from the Big Apple to La La land where she even gave interviews mid-air and a concert. On either coast, she was heavily involved in meeting and greeting fans and performing. Matter of fact, one of the gigs was playing songs for folks at the Jet Blue terminal at LaGuardia Airport.

Urban apparently prefers to travel a bit cheaper, though like Swift, he apparently believes music is a transformative power when it comes to transportation. Urban went to Penn Station in New York to play four songs for passersby this morning. A user of Twitter, Urban tweeted "Hey New York City, if you're in the Penn Station area right now, come by and see me for a bit."

But he wasn't done there as he warned fans "Philly... I'm headed your way next! Meet me at 30th Street Station (Amtrak) on Market Street at 1PM today. See you there." A local radio station also pushed the appearance.

While in the City of Brotherly Love, Urban played five songs including some of Elton John's Philadelphia Freedom. "It was either that or I do a Philly cheese steak theme song," he said, according to the Washington Post.

And then it was back hitting the rails again on Amtrak, returning to New York. But Urban was not taking a snooze. Nope, he played a concert on the train itself. A bit different.

Urban returns to typical forms of promotion by playing The Today Show on Wednesday and CBS Early Show on Thursday.

Apparently, artists are thinking of clever ways to push their new music. Nothing wrong with that, of course, especially in this day and age where you must try making as big a splash as possible to generate publicity and hoped for sales.

In the case of Urban and Swift it was a chance to get closer to the fans in an intimate, albeit public setting. Very cool for the fans, and hopefully fun for the artists as well. This is all part of the new equation in trying to reach out and cultivate fans.

Darn good thing neither started down the highway to hell.