Julianne Hough says the video for her new single Is That So Wrong was sort of, kinda banned by CMT, which would be a huge deal considering the cable station is the key player in the country video scene. 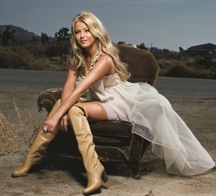 In a review of her Dec. 13 show in Hanover, Md., the Washington Post review quoted Hough, "This next song - funny story....I shot a music video for it . . . and (Country Music Television) kind of banned it. Apparently I was taking off too many clothes as I was dancing across my bedroom." She paused to let this sink in. "But I don't know - I kind of liked it."

But not so fast, according to CMT. A station rep told The Boot web site that wasn't exactly true. The rep said "contract negotiation problems" were at play. The story at The Boot said CMT and parent company, MTV, were negotiating with VEVO, which distributes all videos from Hough's label, Mercury Nashville.

The video is not all the easy to find on the web. Hough talks about the video on her own web site, but you can't find it there. "I felt like it was exactly what I wanted to do," she said in the teaser video on her web site. "We wanted to do like Flashdance, like Footloose, the angry dance...when you just have to express yourself through dance apparently...I'm just excited about it."

So stoked that it is nowhere to be found at the obvious places, although a few sites are carrying it. It strikes me as rather odd. If she loves the video so much, why isn't it on her web site. An artist's web site not carrying a video is a rarity these days.

There's nothing particularly wrong with the song. It's catchy, a bit harder-edged vocally country pop with a good vocal outing from Hough. Basically, the bottom line is she wants some action.

As for the video, well, it would be understandable why CMT would not want to play it. As Trace Adkins would say, Hough is "one (ultra) hot mama." Save she's a lot younger than the types of mamas Adkins was singing about.

In the video, Hough is in her apartment with very short cut-off jeans and a top. She gets rid of the covering and eventually is dancing around, doing back flips, arching her body and giving every indication that she wants to get it on right now especially with a few pelvic thrusts - if only a guy was in the room. Hough, of course, shows off parts of her body to good effect.

No doubt about it - Hough sure is damn good looking in this video, and it absolutely would capture the male crowd out there.

But let's put it another way - you would not want your young kids watching this video and acting like this. That's for sure.

So whether CMT banned it or not is not clear. But Hough may have gotten the next best thing or maybe best thing - a lot of publicity and wonderment about the song and video. Of course, in conservative circles that video sure isn't going to go over too well.

The title of the song seems ironic for the video. Is that so wrong? Some doubtlessly would answer yes. Hough can do whatever she wants to do, of course, when it comes to making videos, but CMT also isn't obligated to play it last I knew. It leaves you wondering what exactly Hough and her crew were thinking.