Yearwood wins award: one of five worst cookbooks of 2010

I love cooking and eating. I have for many years and enjoy looking at cookbooks and especially using them. In writing this, I acknowledge that I have never seen Trisha Yearwood's new cookbook, but the book has not won plaudits in soie quarters.

Physicians Committee for Responsible Medicine, a Washington-based group of "doctors and laypersons working together for compassionate and effective medical practice, research, and health promotion," put the book on its list of "The Five Worst Cookbooks of 2010." 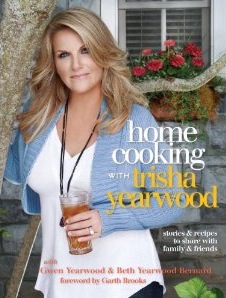 PCRM has led the way for reforms of federal nutrition policies. The group said on its web site, "Some popular cookbooks of 2010, including recipe collections from top chefs and celebrities, encourage Americans to fill up on high-fat, meat-heavy meals, even as the country struggles with record obesity levels and skyrocketing diabetes rates. Dietitians with the Physicians Committee for Responsible Medicine reviewed the year's new cookbooks and named the worst offenders."

Yearwood "won Grammys for her songs, How Do I LiveI Fall to Pieces. This year she released another heartbreaking work - this collection of high-cholesterol recipes. The Georgia native presents her recipes with family stories and tips, but unfortunately, the book does not take into account the state of Southerners' health. States in the Southeast have the highest rates of obesity in the nation, but Yearwood's recipes are loaded with fat and cholesterol. Garth's Breakfast Bowl, for example, includes eight large eggs, a pound each of bacon and sausage, cheese tortellini, cheddar cheese, tater tots, and butter."

Wow. Is that enough to feed a football team or what? No wonder Garth complained being some fat singer or something to that effect in his Nashville concerts. Maybe he ought to convince his wife to change her cooking habits.

Other cookbooks on the list were "Gordon Ramsay's World Kitchen: Recipes from The F-Word," "Barefoot Contessa How Easy Is That?: Fabulous Recipes & Easy Tips," "How to Cook Like a Top Chef" and "The Primal Blueprint Cookbook: Primal, Low Carb, Paleo, Grain-Free, Dairy-Free and Gluten-Free."

I guess Yearwood should feel good about herself. At least her cookbook was mentioned in the same breath as Ramsay, the Barefoot Contessa and Top Chef. Not bad company even if you're going to get trashed.

Well as someone who likes cooking and eating, the idea of a high calorie, high cholesterol cookbook isn't all that exciting of obese times. Maybe next time, Yearwood goes low calorie, low cholesterol.