Alan Jackson spent a long long time - his entire career - with the Arista label. Arista released his first album, "Here in the Real World," in 1990. But last week, it was announced that AJ was leaving the label that helped make him a household name.

In some ways, it wasn't a surprise. There were indications through a few vague comments uttered last year that the long, tall Georgian may leave Arista. There also seems to be less label loyalty these days as well. The thought, for example, of Bob Dylan leaving the Columbia stable was considered heresy even though he was not a huge seller. What mattered was that he gave a certain cache to the record company. Ditto for Bruce Springsteen. 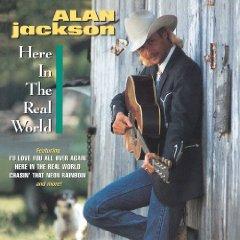 There have been extremely few sacred cows in country at all. If George Strait left MCA, where he has been since 1981, now that would be huge news. When Reba decided to bag it and go with the Big Machine stable, which quickly established itself as the premier label in Nashville in only a few short years, that was a surprise on one hand, but not so much on the other as the word was out there that she may jump ship. Tim McGraw is just about gone from Curb - he has made that clear he wants out.

In this day and age of sagging sales and shrinking labels, the idea of needing to stay with a label for an artist and vice versa just doesn't seem to matter so much.

As for Jackson, Sony Nashville (Arista's parent) and Jackson released short statements. The label said, ""Sony Music Nashville wishes to thank Alan Jackson for their long association and the many hit records achieved as a result of that association. In an amicable parting, Sony confirms that Alan has delivered his final recordings to the company and wishes him well." Jackson's last studio disc was "Freight Train," out almost a year ago. He released "34 Number Ones" in November 2010.

Jackson kept it short, "It just seems to me like the time may be right to change things up a bit and see what comes next."

So we have what is referred to as an "amicable" parting of the ways. Aren't they all (sic)?

In a column on the Our Country Yahoo! country music blog, Chris Willman said he talked with Nancy Russell, Jackson's manager, who denied he was ready to run to another label.

"Alan asked to be let off the label in September," Russell told Willman. "We decided we would support the hits package.

Russell said talks were ongoing with other labels. "We're excited about some of these other folks we're talking to. There are some pretty cool people out there."

Willman talked with Jackson in February 2010, and he wasn't so excited about the label support. "These labels are getting to where they don't have much money to push anything anymore, so I don't know. A lot of people seem to be doing it on their own and just getting the record out that way. But it really won't change anything as far as the fans as concerned, but just be a different angle business-wise. Touring, I'll just keep doing what I do, 40-50 shows, as long as we can sell some tickets. As long as radio still plays me, we'll still keep chugging along."

Willman said he doubted the split was a result of Jackson becoming less popular. He may not have had any number ones with "Freight Train," but he still sells and has hit singles. "The most likely culprit would seem to be money," Willman wrote. "The superstars of the business are no longer selling what they did...Major labels that once would have kept prestige artists on their roster at any cost, as figureheads and talent magnets, are now just looking at the bottom line."

If Jackson were to go with a major label, it seems likely he'd go with Big Machine or Show Dog, Toby Keith's label. Warner isn't exactly rolling in dough these days. Universal just had layoffs last week across the label.

It's a tough world out there, and Jackson's actions were yet more evidence of the same.