Talking about baseball and country

It still may be March Madness (well only for a few more days unfortunately), but it is now baseball season.

Country music has enjoyed its share of baseball-themed songs. In fact, there was a nice piece about that at the CMA Music Festival web site today in a story by Ben Bennett.

Bennett dished out his top 10 of the "Greatest Baseball Songs of All-Time." Bennett did a good job, by and large, of picking out the best of the country songs.

Topping the list was the bouncy Cheap Seats from Alabama. Real good song, even if I wasn't the hugest fan of the band. Randy Owen did a good job singing the song, and it captured the baseball scene quite well ("mustard and relish" along with sitting in the "cheap seats," of course). 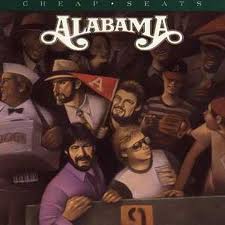 The one song you always seem to hear at any baseball game is John Fogerty's Centerfield, second on the Bennett list. I always loved that song from the get go, but it's funny how it also indicates how times have changed. When it was released, Fogerty was considered a rocker. Now, he's a rootsy rocker, and I guess this qualifies as country as much as anything these days.

3) The Greatest by Kenny Rogers.

4) Take Me Out to the Ballgame by a bunch of folks apparently, but not sure I remember a country version in particular. And Bennett didn't seem to pick one either.

5) I'm Talking Baseball by Terry Cashman. Fine song, but I don't remember this as being country when it came out either. I guess times have once again changed.

6) Swing by Trace Adkins. This is not really a baseball song, but Bennett says, "Now if that's now an all-American baseball song I don't know what is."

7) Hey Batter Batter from Trent Tomlinson. Bennett says this isn't a baseball song either and not sure I remember it anyway. I guess if this made the top 10,t hen there can't be a lot of baseball songs with a country bent, are there?

8) Celebration - Kool & the Gang Okay, I know this song, and Bennett, you lost street cred with me on this one. This is one of the most overplayed songs in history. Well, Bennett does point out he heard this song at every home game of the Texas Rangers while going into the stadium. Maybe this one is on the Rangers, not Bennett.

9) Cotton-eyed Joe - yet another one by Bennett, which he acknowledges has nothing to do with baseball. It's actually about race relations at a larger level.

10) The theme songs from ESPN Sunday Night baseball and Fox for the World Series. Sounding like a broken record, but are these country?

I find some of this interesting, but overall, Bennett makes the argument that there really aren't 10 baseball songs there. At least not on his list.

One album to check out is "The Baseball Project, Volume 2" from Steve Wynn (Dream Syndicate, Steve Wynn and the Miracle 3) and Scott McCaughey (Young Fresh Fellows, Minus 5, and R.E.M). Not everything is rootsy at all, but there are a few songs that make the grade (Fair Weather Fans), and these are originals about events in baseball of recent decades.

Music seems more tied to arena rock anthems than baseball, but kudos to Bennett for at least making a stab at coming up with a list.