Brad Paisley always - and I do mean always - has been a big favorite of mine. That was true from his first CD, "Who Needs Pictures" way back in 1999, which aptly demonstrated that this guy was proud of his country roots and wasn't running away from them in fear for his career. 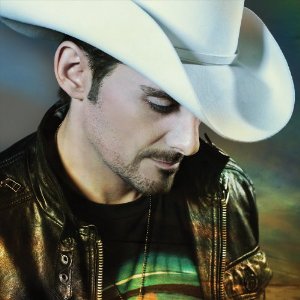 That became apparent over the years and not only through the strength of his songs and CDs. I distinctly remember that he made it quite clear - in contrast to his Nashville counterparts - no way was he going to remix a song to appeal to the pop crowd and crossover. Nope, he was going to stick to his guns and let the music fans accept him for what he was.

Fortunately, that has been increasingly true over the years. He went from opening act to headliner and now even hosts the awards shows and gets nominated and wins awards too. Not a bad career trajectory.

Now at 39, Paisley is setting to release "This Is Country Music" on May 24, his ninth studio album for Arista Nashville.

The West Virginian is the cover story of the April 16 issue of Billboard, and the interview proves telling. The title track, of course, is current hit single where he name checks Conway Twitty, George Jones, George Strait and Tammy Wynette by song title and among others and makes the case that country music doesn't shy away from Jesus, patriotism, cancer or other potentially touchy subjects.

In the interview, Paisley said he wanted to let the song stand on its own merits because he was not comfortable doing a covers disc. "I'm not comfortable doing a covers album," Paisley said to Billboard. "Those songs have been done as well as they could've been done or they wouldn't have been hits. No one needs to recut He Stopped Loving Her Today. George Jones recut Hello Darlin' in honor of Conway (Twitty) and between those two, you can put that one to rest . . . Same with 'A Country Boy Can Survive,' and 'Take Me Home Country Roads' . . .I wanted the album to be 'This Is Country Music' now, not then."

Great quote. Paisley is making it clear he is not living in the past. He also underscores the point - musically - that the "now" for him is his take on traditional country music.

Doing so has served him quite well with 16 number 1 singles and 5 number 1 country albums.

On his new disc, he gets help from such people as Carrie Underwood on Remind Me . This is not their first collaboration. They had done so on On Love from his 2007 disc, "5th Gear." Don Henley helps out Love Her Like She's Leaving, and Clint Eastwood gives a whistle as well on a song named after him. Brad Shelton offers his services on Don't Drink the Water, about taking off for Mexico. Sounds like the kind of song that Shelton was meant for. Of course, Alabama sings on the current single, Old Alabama. Having recorded religious songs previously, Paisley closes with the first song he ever sang - at age nine in church - Life's Railway to Heaven. Marty Stuart and Sheryl Crow lend their voices to the song.

Paisley says he has fun songs on the disc, which also is no surprise. Sometimes Paisley gets a little too cutesy, but he manages to include enough diversity - sometimes instrumentals - as well to show that he is unlike any other artist out there.

Paisley deserves a lot of respect for who he was and how he has stayed true to his musical vision. A lot of artists can't say that, and a good chunk of them may not be making music any more as a result

When Paisley says, "This is Country Music," it is.