A special night honors the Man in Black

An effort to spruce up the boyhood home of Johnny Cash gained a lot of momentum this week with a benefit concert in Arkansas raising hundreds of thousands of dollars.

More than 7,000 people showed up for the sold-out show at Arkansas State University, raising $310,000. All of the money went to restore Cash's boyhood home in Dyess, Ark.

A triptych of screens featured a montage of black-and-white Cash family photos, interspersed with clips of Cash singing many of his hits, including Man in Black and Old Chunk of Coal. 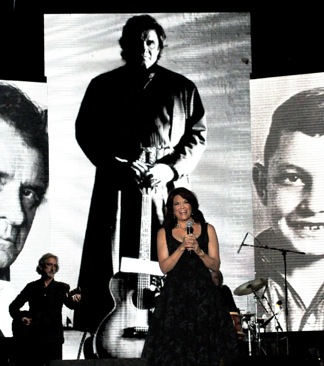 Rosanne Cash singing at the benefit

Rosanne Carter started the four-hour show with Pickin' Time before introducing Kristofferson. He talked about his relationship with Cash and launched into an acoustic set of Sunday Morning Comin' Down, Here Comes that Rainbow Again, Good Morning, John and Me and Bobby McGee.

John Carter Cash, son of Johnny and June Carter Cash, and daughter Laura, took a turn on If I Were a Carpenter. Laura did the bright

This wasn't a show of only Johnny Cash songs, but also family favorites and originals.

The concert's momentum shifted with John Carter Cash's rousing solo performances of Folsom Prison Blues and Rock Island Line, followed by Tommy Cash's renditions of Five Feet High and Rising, and I Walk the Line, followed by (Johnny's sister) Joanne Cash's version of Suppertime. Bluegrass duo Dailey and Vincent and members of their ensemble brought the crowd to its feet with an a cappella rendering of When the Roll is Called up Yonder. They then joined Laura Cash on Billy Christian, and finished the show's centerpiece set with Daddy Sang Bass, interspersed with Will the Circle Be Unbroken.

Jones performed I Got Stripes and He Stopped Loving Her Today. Gary Morris and Matt Morris turned in Leonard Cohen's Hallelujah. Jonesboro native Denny Strickland sang Cry, Cry, Cry. Rodney Crowell and Tommy Cash performed Crowell's I Walk the Line Revisited, a piece of songwriting detailing Crowell's memories of hearing I Walk the Line as a child. Rosanne Cash performed the Radio Operator, Tennessee Flattop Box, and I Still Miss Someone as solos, but performed Give My Love to Rose with Rodney and Chelsea Crowell. Kristofferson offered a performance of Why Me Lord, and the finale, including the entire cast and many Cash relatives onstage for the first time that night, was Angel Band and a reprise of Will the Circle Be Unbroken.

Rollingstone.com said the Cashes The Cashes were one of 500 families relocated to Dyess in the mid-1930s as part of a Depression-era project designed to give them a new start and 40 acres of land. Cash lived there from the age of 3 through high school graduation in 1950. The house was recently purchased by Arkansas State University in Jonesboro, about 30 miles away.

The money raised will go to restore the Cash home, create a Johnny Cash Childhood Museum in Dyess and help rebuild the small town.

Congrats to all for what sounded like a great and special night of music, honoring and helping the Man in Black.