Strait keeps dancing with the right one

There's a lot to be said for sticking to you guns. Just ask George Strait. The long Texan has been a country star for a good three decades now. In this day of here today, gone tomorrow kind of music where it's all so dispensable, Strait obviously has a lot of staying power.

Strait had his first hit in May 1981 with Unwound, his very first single. The number of top 10 songs is amazing. Consistency reigns for Strait. 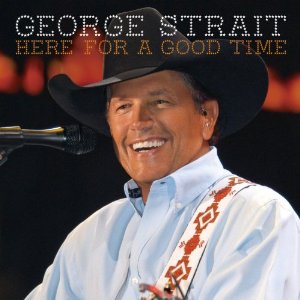 And he's not doing anything to dissuade you that anything will be different in that regard with his new disc, "Here for a Good Time," out next week. On first listen to some tracks, Strait hews to his traditional country melodies. Doing so has served him well.

While others sound as if they are treading musical water and not really offering anything new from album to album (Rascal Flatts in my book for one, although, of course, they have a good, big fan base), Strait stretches it out on the new disc in at least one sense. He was involved in writing 7 of the 11 songs with his son Bubba and long-time song contributor Dean Dillon. Strait also wrote the title track and current hit single.

This is probably the most surprising aspect of "Here for a Good Time." For years, Strait hardly was involved in doing any writing. Given his musical status, he certainly was getting the creme de la creme when it came to being offered songs of other writers.

When "Twang" came out, it was also surprising that Strait was involved in penning three of the songs, two with Bubba and one on his own. I'm not exactly sure what's driving the creativity, but somehow it always has struck me that in country music, performers often sang the songs of others instead of their own.

Of course, a good singer will pick songs they can relate to and hopefully even have experienced the message or story of the song, but isn't it far better to actually be the writer? (It sure is financially for the performers, although at this point, that certainly isn't a motivator for Strait).

Strait announced today that he'll head back on the road with Martina McBride come January. Strait just gets up there, does his songs without tremendous fanfare - the sizzle is in the song, his band and his singing.

Strait's been very consistent - he typically offers very strong traditional country albums (okay, maybe there's a bit of a Mexican feel at times), sings great, tours regularly and dances with the one that brought him. It doesn't get any better than that.