One of the greatest voice in rock and other genres, Levon Helm enjoyed different periods of success in his career from being the voice of The Band to his own solo efforts later in life.

I can't say that I grew up with The Band and Helm. They were a bit before my time when they started gaining fame with Dylan in the Sixties and later in the '70s, culminating in their final gig in San Francisco, The Last Waltz. But I have fond memories of Helm. 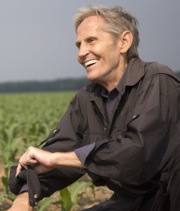 I remember seeing the movie when it came out. It sure looked like a whole lot of fun to have been there, of course.

Helm came far more to my attention with his solo career starting with his first solo disc, "The RCO All-Stars" back about 1980 or so. I followed his career after that, listening to his music, but never seeing him live - at least not then.

Interestingly enough, it seems like Helm gained more and more respect over time. What was once rock was now part of the roots and Americana scene, and Helm was a part of it. The change in the music scene benefitted Helm because it brought him to a new, wider audience.

That was particularly true in the past half dozen years or so with the release of "Dirt Farmer" and "Electric Dirt." Attending a Helm concert became a regular occurrence for me both in Boston and several times at the Newport Folk Festival.

What stood out for me was the unbridled joy Helm brought to the concert or maybe it was vice versa. Wearing leather gloves, he set a sturdy drumbeat, fully engaged. Sometimes he played mandolin. Sometimes he danced around, getting turned on by the music.

It probably shouldn't come as a surprise that Helm had a smile on his face. After all, he beat throat cancer, which left him unable to sing - for awhile anyway. He regained most of his ability to sing fortunately.

Meshing songs from his days with The Band along with his own material simply worked. Having a stellar band spearheaded by guitarist Larry Campbell, who was his bandleader, helped. One felt the joy he had in having his daughter Amy as part of the band. Even when his voice really went the last few years, that joy remained intact. One suspects it must have been hard to let go of singing, but his band and the crowds enjoyed the music.

I'm sorry I never got to attend his Ramble in Woodstock, N.Y. where he lived. Helm and his band played along with various guests in a small setting. Several friends of mine attended in the past few years, and all reported a great time. Through the Ramble, which Helm fortunately took on the road, Helm brought music to the people.

Thank you Levon Helm for the great body of music you brought to the masses from a career able to span decades. Your persona and music will be missed, but at least your music will live on. Levon Helm was the real deal.