Marty Stuart is country's renaissance man. He's held that title pretty much without challenge for years. The guy may have left home in Philadelphia, Miss. at the ripe young age of 13 to go on the road with Lester Flatt, and he's enjoyed a pretty darn good career. 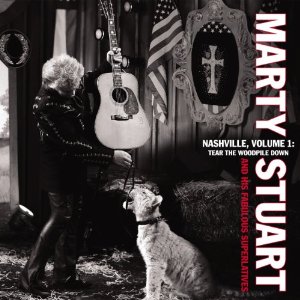 Stuart enjoyed a chunk of hits in his commercially successful heyday, like Hillbilly Rock and Western Girls from 1989. He also achieved much respect as great photographer.

Perhaps most importantly Stuart demonstrated his love of traditional country music. The affable Stuart achieved this in several ways. First, he is a collector of country music memorabilia, looking to the past to preserve the musical heritage for the future. The collection is an extensive one and not a bunch of outfits and instruments that he keeps tucked away under lock and key. Stuart has been generous in letting the public see his collection.

Then there is the music. Stuart has a long history of great CDs - "Pilgrim" in 1999, "Souls' Chapel" and "Badlands," both from 2005, "Ghost Train (The Studio B Sessions)" in 2010. He was the kind of artist who even threw instrumentals into the mix, and pretty much aside from Brad Paisley, no one's been doing that. And he helped others as well, producing, for example, Porter Wagoner's final CD "Wagonmaster," done with love and care for the singer and music. Stuart strays occasionally from country for blues and gospel, but those are connected with country.

Now we have Stuart's great new CD, "Nashville, Volume 1: Tear the Woodpile Down" to enjoy. Stuart, who produced the 10 tracks, sounds confident and with good reason. This is one fine CD with folks like Buck Trent on banjo and, with at least a tip to the past in a way, Hank Williams III singing on the closing song Picture From Life's Other Side.

Fortunately, life hasn't necessarily been like that for Stuart, although he's certainly endured his personal and professional ups and downs. Check out the extensive liner notes from Stuart, and a greater understanding of his life will result.

Stuart also knows how to pick an ace band, once again His Fabulous Superlatives. The name may be over the top, but the appellation is deserved. Listen to Kenny Vaughan on guitar, and you'll see why. There's also Harry Stinson on drums and Paul Martin on bass.

There are not a lot of cats hanging around Nashville these days making music like Marty Stuart. In this day and age where the top stars with only a few exceptions are playing a brand of country far far away from Stuart's vision, he is a welcome breath of fresh air. Good thing this is labeled "Volume 1." That means more is in store.