Hearing that Randy Travis was arrested on Tuesday in Texas was sad news. 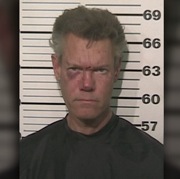 Police responded to the scene after a passerby called police and were told there was "a man lying in the roadway." In a mug shot, Travis appeared to have a cut between his eyes and a bruise under his right eye.

Prior to the accident, Travis allegedly went into a convenience store naked and asked for cigarettes. When asked how he was going to pay for the cigs, Travis left the store.

This is the second incident involving Travis and police this year. In February, he also was arrested in Texas, charged with public intoxication. He pleaded no contest to that charge.

Sanger, Texas police found a vehicle parked in front of a Baptist church in the early morning hours and discovered Travis in the car with an open bottle of wine, the Denton County Sheriff's Office told CNN.

At the time, Travis said to CNN, "I apologize for what resulted following an evening of celebrating the Super Bowl. I'm committed to being responsible and accountable and apologize for my actions."

All well and good, but it seems pretty clear that Travis needs help. Safe to say,it's not normal to do what he did walking around naked. But one wonders if Travis also has some problems with the bottle, considering that there are are now two incidents in about six months involving alcohol.

Travis may get a great singer but he's going to have to turn his life around and soon especially after another embarrassment.