Welcome news - hopefully - from The Mavericks

The news received last week that The Mavericks had a date set for their first release in seven years was most welcome news. "In Time" will be out on the Valory Music Group, a sister label to the Big Machine folks, and it's dropping on Jan. 29. The 14-song release coincides with The Mavs' 20th anniversary of their first major label album on MCA. 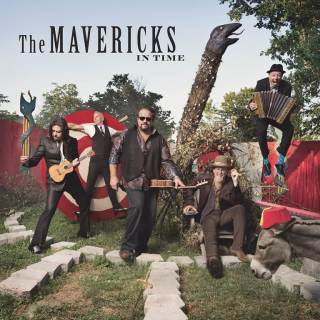 The Mavs were not a straight-ahead country band. Instead, they had a Roy Orbison thing going on (and still do) thanks to the super fine vocals of lead singer Raul Malo. Yet, they also could hew a traditional country line as well. The group still contains drummer Paul Deakin and bassist Robert Reynolds. Sidekick Jerry Dale McFadden remains around as does guitarist Eddie Perez, who played with them towards the end of the first go-round when he joined in 2003.

To see where the group is at these days, check out their performance at the Americana Music Festival of Come Unto Me, which was broadcast on Austin City Limits. With a punchy horns section and a bit of a Latino feel, The Mavericks sound about as good as ever.

It will be interesting to see if The Mavericks can make any waves in their rebirth. They are slated to tour, and let's hope they retain the magic they once had. That will be our gain and infuse country music with joyous sounds.

On the band's web site, Malo said, "It took life for us to get to this point - Everybody was so free. From the first notes, it sounded like an explosion of sound; We went where the songs took us with a singularity of purpose. We came in to make music as grown-ups, to make music as men."

Malo concluded by saying of his label, "They just wanted a Mavericks record... and I think we gave them one."

We can only hope so.