For Ronnie Dunn, honesty may be the best policy

You can't fault Ronnie Dunn for being honest when it comes to this Sunday's Grammys.

The former one-half of Brooks & Dunn, who thus far hasn't made a big dent on his own, is up for two Grammys, but to hear him tell it, he is not going to come home with any trophy. 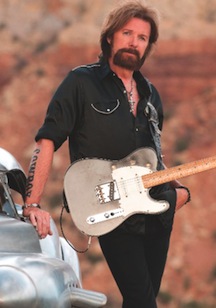 Dunn also is up for Best Country Song for the same song, which he wrote with Phillip Coleman. His competition includes Blown Away - Josh Kear and Chris Tompkins, songwriters (Underwood); Even If It Breaks Your Heart - Will Hoge and Eric Paslay, songwriters (Eli Young Band); So You Don't Have To Love Me Anymore - Jay Knowles and Adam Wright, songwriters (Alan Jackson); and Springsteen - Church, Jeff Hyde and Ryan Tyndell, songwriters (Church).

On Wednesday morning, Dunn posted on his Facebook page "Well, off to the Grammys. I don't stand a chance at winning but I didn't stand a chance at getting nominated, so. This is the ultimate hail Mary. I owe respect and gratitude to those of you who have brought it this far. A part of me wants to go hide somewhere.... I'm not cut out for the hoopla but I'm showing up."

Okay, so he's not going to pull a Toby Keith and find himself elsewhere. Good move. Might as well at least show up and understand there's a reason you were nominated, even if you don't think you're going to win. Accept the nomination as an honor in and of itself.

I can't say that I blame Dunn for feeling like he's not going to win. For Best Country Solo Performance, the other songs all were far bigger hits and received radio play. In fact, Cost of Livin' was not what you'd commonly call much of a hit at all. The song made it to 19 on the country charts in 2011, below Bleed Red, which made it to number 10 earlier that year. In fact, Dunn is not even on the label that released the music, Arista.

As for the Best Country Song category, Dunn's pretty much in the same boat, one would think. Well, maybe he could share the boat with Knowles and Wright for the Jackson song.

Stranger things have happened, but Dunn is probably calling it like he sees it. Can't blame him. It doesn't mean, of course, that the music isn't worthy. Heck, it was good enough to be nominated. So congrats on that and enjoy your time out in LA, Ronnie.