Who is country's hottest bachelor? Don't ask me

One would get the impression that country music involves having a good time with the country girls out there.

Maybe so, but apparently it breeds a lot of singledom also. At least, that's what I'm left thinking thanks to Country Weekly's survey "Who is Country Music's Hottest Bachelor?" 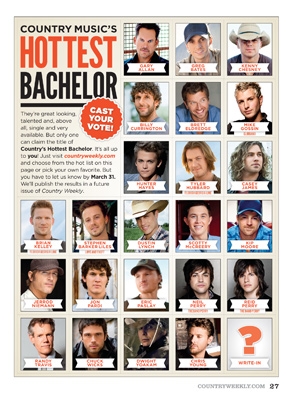 The list is long, and it's clear to me that they're not all hot either, but here goes:

How long could Yoakam be hot for? I mean the guy's in his 50's, one of my favorites, but he is not a youngster any more. Ditto for Travis, and, he of course, has his own set of issues going on. Me thinks he will not win the vote.

I don't see Pardi or Paslay winning either because the fact is hardly anyone heard of them. Ditto for Greg Bates and Gossin.

Hayes looks like he's about 15, McCreery maybe about 17, so not sure about them winning.

Young has a real nice photo on this page (you can barely see Yoakam by the way), and I say he wins. He is good looking, for sure. (and while this isn't part of the voting directions, he also has some good songs and a fine voice)

Of course, this leads to another question about why is there the need for the overt sexualization of people, Country Music Weekly? I wonder who Country Music's Hottest Bachelorette is? Or who made the list? I get that people like performers who are attractive (although looks do not equate with quality of music of course).

CW could argue this is just good old country girls having fun (based on the comments because no males could be found on a quick look for comments), but the whole thing seems very sexist and silly.

Lightweight would be another word in this world of commercialism.

Hey Chris, hey Dwight, sorry to tell you, but I will abstain from this vote. Good luck anyway.