Cowboy Jack Clement, Bobby Bare and Kenny Rogers received the highest honor possible from the country music community on Wednesday - they're going to be joining the Country Music Hall of Fame. 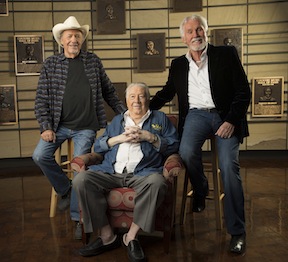 It doesn't get better than that. To be recognized in perpetuity for your work in something you (presumably) loved doing, well, what a tremendous honor.

As Bare said at the press conference at the Hall of Fame announcing the honor, "This is big - an honor and the validation of a dream, totally unexpected. Now I'll be famous forever."

Not that fame is the be all and end all. It isn't, of course, but it's pretty cool going to the Country Music Hall of Fame in downtown Nashville and seeing the plaques of the soon to be 121 members hanging on the wall.

A big congrats to Clement, Bare and Rogers.