Kanye West certainly is one complicated person. Read his interview in Tuesday's New York Times with John Carimanica as proof.

And if you're a Taylor Swift fan, weep. 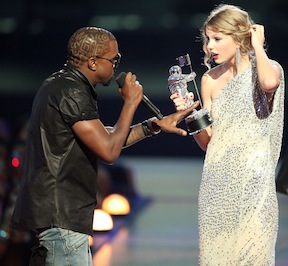 Mr. Kim Kardashian is about to release a new disc, "Yeezus," which is the focus of the interview along with his perspectives on a variety of topics.

Near the beginning of the lengthy piece, West is asked about the Swift controversy where she won a MTV Video Music award, and he got up onstage to interrupt her out of nowhere to say she didn't deserve it. The incident caused West to retreat from public view for the better part of a year.

While issuing an apology at the time, he apparently isn't so keen on having done so and has no regret for his usurpation of Swift's time

Here's the part of the interview concerning Swift:

You've won a lot of Grammys.
"(My Beautiful) Dark (Twisted) Fantasy" and "Watch the Throne": neither was nominated for Album of the Year, and I made both of those in one year. I don't know if this is statistically right, but I'm assuming I have the most Grammys of anyone my age, but I haven't won one against a white person. But the thing is, I don't care about the Grammys; I just would like for the statistics to be more accurate.

You want the historical record to be right.
Yeah, I don't want them to rewrite history right in front of us. At least, not on my clock. I really appreciate the moments that I was able to win rap album of the year or whatever. But after a while, it's like: "Wait a second; this isn't fair. This is a setup." I remember when both Gnarls Barkley and Justin [Timberlake] lost for Album of the Year, and I looked at Justin, and I was like: "Do you want me to go onstage for you? You know, do you want me to fight" -

For you.
For what's right. I am so credible and so influential and so relevant that I will change things. So when the next little girl that wants to be, you know, a musician and give up her anonymity and her voice to express her talent and bring something special to the world, and it's time for us to roll out and say, "Did this person have the biggest thing of the year?" - that thing is more fair because I was there.

So no regrets?
I don't have one regret.

Do you believe in the concept of regret?
If anyone's reading this waiting for some type of full-on, flat apology for anything, they should just stop reading right now.

But that is something that you apologized for.
Yeah, I think that I have like, faltered, you know, as a human. My message isn't perfectly defined. I have, as a human being, fallen to peer pressure.

So that was a situation in which you gave in to peer pressure to apologize?
Yeah.

Needless to say West is very full of himself. I mean who calls themselves "so influential and so relevant." If you need to tell people that either you aren't, or you have an ego problem and a tremendous amount of insecurity. In the case of West, I would suspect it's all about ego and insecurity.

We all do things in life we wish we could take back. So did West, but he has chosen to play it both ways. Apologize, but not really. This really has nothing to do with Swift. It could have been anyone, but Swift was the object that night. One suspects she'll take the high road and not bother getting into it over West's latest comments.

As for West, he remains a lightning rod for controversy. Who knows? Maybe it's a case of saying anything to sell and be culturally relevant.