The Civil Wars cause head scratching

The Civil Wars received the word that they were nominated for Best Duo on Tuesday by the Country Music Association.

Great news, right? For sure, but it's all a bit strange.

Other nominees for Duo of the Year were Big & Rich, Florida Georgia Line, Love & Theft, Sugarland and Thompson Square. 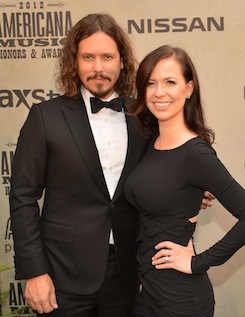 The Civil Wars in happier times

Frankly, I view this as a huge head scratcher. Cutting right to the chase, how the heck did the duo of Joy Williams and John Paul White get nominated in the first place? I have no idea whatsoever and can't begin to imagine how that was even possible. (I'll assume the ballot box was not stuffed)

That does not mean it was not deserved. Far from it because I've been a very big supporter of Williams and White and have had the pleasure of seeing them perform at least three times in New England - great every time.

Their self-titled disc released in August was one of my favorite albums - maybe the favorite album of the year. For one week anyway, it was the best selling disc in the entire U.S.!

Williams and White are a great team when it comes to vocals and putting their heart and soul into the songs. Both have expressive songs, and the songs are quite good. (Now if they could only figure out a way to improve on their personal relationship and hit the road, that would be great. Note: they are married to other people, but they had some sort of split last year.)

So, my great surprise has nothing to do with the music of The Civil Wars.

It has all to do with them not gaining a foothold on the country commercial market, which is what the awards tend to be all about. Apart from singing with Taylor Swift on Safe and Sound for "The Hunger Games" soundtrack, they are not exactly heard on country radio at all.

And when you compare them to the other folks nominated, you can see what I mean as all have enjoyed airplay.

When it comes down to it, I think the chances of The Civil Wars winning are, well, to quote Elvis (Costello, that is) are less than zero. Sometimes getting nominated is enough. In the case of The Civil Wars, it's going to have to be.

Who can figure what lurks in the minds of the deciders, but it's great to recognize such a fine group. Congrats are due to The Civil Wars.