The hills aren't live for Underwood's Sound of Music

Carrie Underwood faced an unenviable task when she agreed to play the role of Maria in "The Sound of Music."

Numerous people wondered what the point was of reprising the chestnut of a musical movie when the comparison is with the iconic Julie Andrews. After all, who could possibly measure up to Andrews?\ 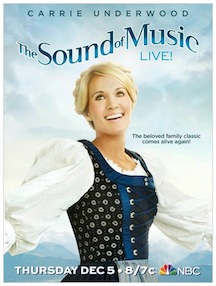 The fact of the matter was that they were right. Underwood demonstrated an ability, of course, to deliver on the songs. If she couldn't have done that, then there was absolutely no reason to hire her in the first place. She's a sure fire vocalist. Always has been.

When it came to acting, well, she fell woefully short. As pointed out in numerous reviews, Underwood's acting was wooden. There was very little chemistry between her and fellow actors. There just didn't seem to be any flow to the presentation.

This should not have come as a big surprise. Underwood's resume was on the thin side prior to undertaking Maria. Underwood was in "Soul Surfer" back in 2011, the movie about the Hawaiian surfer whose arm got bit off by a shark.

The powers that be at NBC thought that Underwood would be able to deliver her audience, and she most certainly did. About 18 million watched the live three-hour telecast of "The Sound of Music." The producers could have picked other actresses who would have been able to deliver when it came to the acting side. The problem was that if trying to attract a huge audience and recoup on a $9 million or so investment, you'd better have someone who will automatically bring a crowd.

As for Underwood, she apparently was stung by the criticism, and who could blame her? She fired back at the criticism, tweeting, "Plain and simple. Mean people need Jesus. They will be in my prayers tonight."

While it was undeniable that the show was lacking, NBC and Underwood both deserve credit. About the only live TV shows these days are sports, news and Saturday Night Live (the latter spoofed "The Sound of Music" last Saturday night). Credit goes to NBC for trying something different in this day and age of not taking chances.

Underwood also took a risk. She stretched well beyond her comfort zone, and while not exactly going to make anyone forget about Andrews, Underwood probably did about the best she could.

Don't worry though because when all is said and done, Underwood can probably rely on her singing career to get her through.