Willie Nelson is not slowing down. Based on the past few weeks, that's quite apparent as he does not seem quite ready to join AARP even if he is 81.

Nelson remains a road warrior, playing date after date. Not to mention being one of the most prolific artists out there. And he is not going through the motions either. 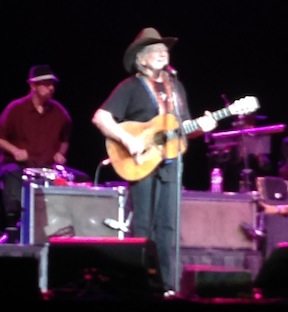 Last week, he released his brand new CD, "Band of Brothers," a solid effort produced by Buddy Cannon, who also works with Kenny Chesney. With the CD, Nelson continues his heavy-duty release schedule. In 2013, Nelson released two CDs within six months. Since 2010, Nelson has released 6 studio albums. While he has ventured into offbeat topics, including a reggae album, Nelson finally returns to new material. In fact, he wrote 9 of the 14 songs.

It seems fitting that Nelson closes with "I've Got a Lot of Traveling to Do" because he sure seems to live up to those words.

Nelson is a regular fixture on the touring circuit. He gave a fine show in Boston last week with his voice - perhaps an acquired taste for some - showing no signs of wear and tear. Fortunately, he played a few new songs from the disc, including the title track and "Bring It On," both penned with Cannon (as were all the songs he wrote).

Unfortunately, Nelson did not play any other new songs, which is in keeping with his idea of what makes for a good concert. Chances are exceedingly strong that Nelson will start with "Whiskey River" and continue through a bunch of classics including "Always on My Mind," "On the Road Again" (another fitting song) and "Mammas Don't Let Your Babies Grow Up to Be Cowboys" among many others.

One wishes that Nelson would change it up more song-wise than he does on concert. Of course, Nelson, a fine guitarist in his own right, alters his delivery. The Boston Globe took note of that in a review of last week's show and said at his age, Nelson has earned the right to play as he sees fit. True, but it still would be nice to go into a show knowing that you're going to hear mainly songs you've heard a bunch of times before.

With that said, though, it's not as if Nelson doesn't give his all. He mixes the phrasing up and lets his band play out, which provided for a really excellent night of music. It was no surprise that the crowd ate it up.

A few days ago, Nelson received excellent news - "Band of Brothers" was the top selling country disc in the U.S. Nelson's style is in such contrast to the Florida Georgia Lines and Luke Bryans of the world and certainly most welcome.

It is our good fortune that Willie is not slowing down and hopefully won't any time soon.