Joe Ely shows no signs whatsoever of slowing down and easing into the easy chair as he hits 60. First off, Ely releases a new CD, "Happy Songs From Rattlesnake Gulch" in February on his own Rack 'Em label, yet itself a new venture.

Later in February is publication of Ely's poetic musings of life as a musician on the road, "Bonfire of Roadmaps," on the University of Texas Press. 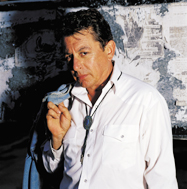 March brings an exhibit of the Texan's drawings at the University of Texas.

Then, there's the release of another - sort of - new album in March, "Silver City," featuring age-old songs penned by Ely, but only recently recorded, followed by two spoken word CDs in April from the "Bonfire" book.

Not to mention reissues of a few of his CDs later in the year, probable studio time with The Flatlanders (Jimmie Dale Gilmore, Butch Hancock and Ely) this summer, future recording projects and a novel.

Lest we forget...Ely is still a road warrior. He's now on the road with a bunch of songwriter friends with names like Lovett, Clark and Hiatt, sprinkled with solo acoustic dates and potential tours of Europe and Australia later this year.

"I had a high school English teacher that said I would never make it to 21, and then I had other people that... warned me of my gypsy lifestyle," says Ely, via cell phone from the Austin area. "The whole time, ever since I left home and lived out on the road, I might appear to have been homeless and a vagabond, but actually I was on a great mission discovering about every place that I was going, drawing stuff and writing stuff down and making songs out of it."

"I'll be 60 in a few days, and I'm busier than ever," says Ely, joking, "I guess I just don't watch enough television is what my problem is. I need to catch up more on TV and things to take up my time like miniature golf and stuff like that. I'm always working on just other stuff, so I don't have time to do the important things in life."

But Ely quickly gets serious, listing his various projects about ready to hit the streets.

First up are the two CDs "Rattlesnake Gulch" and "Silver City," which Ely ties to the book.

"That whole idea came about when the book idea came about," says Ely. "I look at both of these records to be companion pieces to the book because they were written at different periods of time, and most of the recordings, the majority, were finished in the last year. Some of them were started at other periods of time. The time that was covered in the book."

"'Rattlesnake' is the rough and tumble side of it and 'Silver City' is the easy side of it."

Ely, who spent most of his recording career with MCA, HighTone and Rounder, considered going with a label, but ultimately decided that would not work based on his productivity.

"I talked with a couple of record companies and approached them. New West really didn't know what to do with it. (I want to) put out two records on practically no notice."

"I probably have another, I don't know how many whole collections of stuff that I've always wanted to put out, but I've never had the record company that was able to do things other than just one big project every two years."

"I'm looking out especially over the next five years, there are several (projects), I can't say how many, I'm going to put out including a novel and several more records."

"Rattlesnake Gulch" has the typical assortment of Ely songs ranging from story songs about characters to love songs and even a political one.

"Those are characters that...passed through my life when I was on the road. The song, 'Baby Needs a New Pair of Shoes,' started at another time, but I finished it around the time of Hurricane Katrina. I...think the record as going from Viet Nam to Hurricane Katrina."

The lead-off song makes direct references to New Orleans starting with "All my people need food and water/And Baby needs a new pair of shoes."

The track for the humorous "Miss Bonnie & Clyde," about escaping with Bonnie from famed bank robber Clyde Barrow, was cut in 1998.

"The reason that I kept that track is my friend, Donald Lindley, who played drums, died soon after we put that track down. We laid down a track, and I had the sketchings of a story, and I saved the track. Then Donald died, and I put the track away for a few years and never really finished the song until just about a year ago. I finished the lyric, and I dusted off the track. It was the last track he recorded."

"I thought I've got to keep that," Ely says.

"Hard Luck Saint" is about a drifter Ely once knew. "It's actually about a guy from Turkey who came to Ellis Island when he was a teenager and literally lost his parents in Brooklyn never to see them again, and he looked for them for weeks and weeks," says Ely. "He came to Texas because of some picture of a windmill or some dusty old scene and asked someone where it was, and they said it probably looked like Texas. He hitchhiked or jumped trains to Texas, and he worked in oil' fields. I met him."